Vaginal gel blocks HIV ‘ but not enough to be scientific success 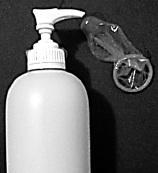 Candidate microbicide PRO 2000 cuts HIV transmission by 30 percent, falling just short of the one-third required to be deemed a success. But scientists say this trial offers proof that the concept of a vaginal gel to block HIV is possible.

For the first time in over a decade of research, a vaginal gel called PRO 2000 has been show to cut HIV transmission by 30 percent.

Principal investigator Professor Gita Ramjee described this as ‘extremely hopeful’ at the simultaneous launch of the results in Durban and Montreal, Canada, yesterday (9 Feb).

‘This is the first microbicide study in over a decade that shows promise. It suggests that we are on the right track and we will be able to develop a women-controlled product to prevent HIV in the future,’ said Ramjee, who heads HIV research at the Medical Research Council (MRC).

In the past three years, four candidate microbicide have failed to have any effect on HIV transmission, leading to despondency amongst researchers.

PRO 2000 was tested on over 770 women in a huge three-year study involving over 3 000 women in southern Africa and the USA. Only 36 women using PRO 2000 became HIV positive in comparison with around 50 women in the other three groups, who were given either a gel called BufferGel, a water-based placebo gel or no gel at all.

This translates into a success rate of 30 percent for PRO 2000 and a success rate of zero for the other microbicide candidate, BufferGel. But according to scientific rules, in order to be judged successful a new product has to be at least one-third effective.

‘PRO 2000 falls short of this by three percent,’ said Ramjee. ‘But are waiting for the results of another study involving PRO 2000, which will be released in December, and this may push up the success rate of PRO 2000.’

Ramjee said she was ‘delighted’ that the gel had a positive effect on HIV even if it fell short of the required one-third, ‘as it means that the concept of a microbicide is right’.

‘For the millions of women at risk of acquiring HIV, especially young women in Africa, there is now a glimmer of hope,’ said the University of KwaZulu-Natal’s Vice Chancellor, Professor Salim Abdool Karim, who led the multi-centre study.

Speaking at the Montreal launch, Abdool Karim said that ‘more research is needed as we can’t yet say that we have an effective microbicide’.

While all women in the study, called HPTN 035, were encouraged to use condoms at all times, among those who tended to use the gel alone without condoms, the gel was found to have a protective effect of 78 percent. However, Ramjee said the numbers of women in this group were too small to draw any conclusions.

PRO 2000 acts as an ‘entry inhibitor’, binding to the HI virus and prevents it from effectively attaching itself to the body’s T cells, according to Dr Ian McGowan from the Microbicide Trials Network, which co-ordinated the study.

Desiree, a trial participant from Chatsworth in Durban who asked only to be identified by her first name, said she was ‘very glad’ about the results.

‘I am glad that there is some progress for the future generation of girls,’ said Desiree, who has a young daughter of her own.

Mrs SM Hlabisa, who chaired the community committee that oversaw the trial in Hlabisa in northern KwaZulu-Natal, said she was ‘so excited about the result’.

‘In our communities, many women are overpowered by men and can’t use condoms. If women have a way of protecting themselves from HIV, it will be so much better,’ she said.

The women who participated in the trial were given extensive education about HIV/AIDS and monitored for 12 months. They were given vaginal applicators loaded with gel, and told to insert the gel up to an hour before they had sex.

Two of the seven study sites were in KwaZulu-Natal, South Africa, where the research was undertaken by the MRC.   It was funded by US National Institutes of Health (NIH).

The ‘next generation’ of microbicide gels are based on antiretroviral drugs, aimed at preventing HIV from replicating once inside the cell, are also being tested at present, with results expected next year at the earliest.

Despite the stigma that all too often accompanies people who declare their HIV positive status, a 26-year old woman in a small town in the Eastern Cape is determined to talk to her community to educate them about the virus and to get on with her life.

The Department of Health has responded to a series of print and radio articles produced by Health-e News Service on the human resources crisis facing South Africa’s health sector as well as the impact of the Department’s delay in releasing a crucial Human Resources Plan.