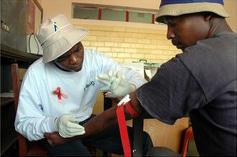 RIO DE JANEIRO: (PlusNews) – Men don’t cry. Men take risks. Men don’t ask for help. Men are strong. Men have many sexual partners. These stereotypes of masculinity are contributing to the spread of HIV throughout the world, experts warned at a recent symposium on men and boys.

“Among other things, these stereotypes affect access to health care, the expression of one’s sexuality, access to sexual and reproductive health services, and vulnerability to HIV,’ said Purmina Mane, the adjunct executive director of the UN Population Fund (UNFPA) at the First Global Symposium Engaging Men and Boys in Achieving Gender Equality, held recently in Rio de Janeiro, Brazil.

Quoting various studies, Mane pointed out that among men high-risk behaviour was accepted and even encouraged, and most were more concerned about their masculinity than their health.

Studies have shown that among men knowledge about their health was lower than among women, and reproductive health was generally considered a women’s subject.

When this lack of knowledge is compounded by another macho stereotype ‘ that seeking help is a sign of weakness ‘ men’s health is at far higher risk.

In the case of HIV, men are known to use counselling and voluntary testing services much less frequently than women, and men also tend to begin antiretroviral treatment later.

“Late diagnosis and treatment means that many continue to practice unprotected sex, running the risk of reinfection and of unknowingly infecting their partners,” said Mane.

These stereotypes also have consequences for women. Dumisani Rebombo, a technical counsellor in South Africa to the international reproductive health organization, EngenderHealth, recalled a patient he had counselled after a positive diagnosis.

“I asked him what his next steps would be, and asked him to bring his wife to the support group. He said he wasn’t going to reveal his status to his wife, nor was he going to use a condom, because he was a man and he’d find a way to deal with it.”

The notion of a man’s strength and invincibility was one of the main risk factors for HIV infection, he commented.

GraÃ§a Sambo, executive director of FÃ³rum Mulher, an NGO working to promote women’s rights, said the idea that men should have multiple sexual partners was contributing to Mozambique’s national HIV prevalence of 16 percent, one of the highest in the world.

“A lot of men have many sexual partners because this is what is expected of them,” she said. “Masculinity is very much instilled by culture and by tradition, which say that men have to be studs.”

Sambo pointed out that although information about AIDS and the dangers of multiple relationships was widely available, if it involved a change in behaviour, men preferred to ignore it.

“We need men who think differently, and who can influence behaviour change … Many of them are changing in the private sphere and acting in a more conscientious manner, but bringing this change into the public sphere is still very hard, because there is still a great deal of peer pressure and they fear being made fun of.”

UNFPA’s Mane concluded: “We need to redefine what it means to be a man. HIV is an opportunity to re-evaluate the rigidness of these norms.”

Bleeding every month is about to get a lot cheaper for many people who menstruate. In some cases, it may even be free.

Strong men are often silent men and when it comes to health care, silence is dangerous. A man’s reluctance to go for a medical check-up or to get information from the local clinic may have devastating consequences for his health. Prostate cancer is the most common male cancer in South Africa, but few men will talk about this illness. Two notable exceptions are former President Nelson Mandela and Archbishop Desmond Tutu who have both had treatment for prostrate cancer. According to the Cancer Association of South Africa 1 in 31 males are suffering from prostate cancer but there’s still a deafening silence around this issue.

The national conference on sexuality has laid the groundwork to ensure that sexuality education will be part of the school curriculum next year.