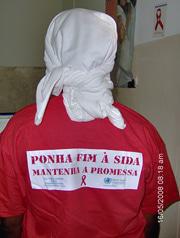 SÃO TOMÃ: (PlusNews) – Twenty years after the first case of HIV infection was recorded in the archipelago of SÃ£o TomÃ© and PrÃ­ncipe, off the coast of Gabon, six people living with HIV/AIDS have decided to take a stand against stigma and discrimination by telling their stories on national television.

A documentary, A SaÃ­da do Gueto (Coming out of the Ghetto), produced by the state-run public broadcaster, TVS, is a first for the country, where an estimated 3,000 people ‘ 1.5 percent of the population of 155,000 – are living with HIV, according to data from the National Programme for the Fight Against AIDS.

Magda Soares, who discovered her HIV-positive status during a medical check-up in 2006, decided to appear in the film because she believes that discrimination by relatives, in the workplace and on the streets is the biggest problem faced by HIV-positive people.

“Nobody went to the market to buy this sickness – all diseases kill when they’re not treated, and those who live hiding their HIV/AIDS die as well,” she told IRIN/PlusNews.

The film is the fruit of a project funded by the UN Educational, Scientific and Cultural Organisation (UNESCO), which trained TVS broadcast journalists and technicians in programme production. It premiered on TVS on 15 May, and also on RTP, the Portuguese television network, and Canal France International.

Coming out of the Ghetto not only challenges viewers to question their attitudes to people living with HIV, but also asks for their help. “I call on people to do something for us, the HIV positive and those ill with AIDS,” says Celso Carvalho in his testimony.

“This documentary will awaken SÃ£o Tomean society to become aware of the disease, because I believe that there are people here who still don’t believe that AIDS exists,” said Jacinto Godinho, the course instructor.

Rita Aleixo, programme coordinator at the international humanitarian organisation, MÃ©dicos do Mundo (Doctors of the World), hopes the film will educate people and contribute to reducing the strong AIDS-related stigma in SÃ£o TomÃ© and PrÃ­ncipe. “This documentary is a new era that is opening up in these people’s lives,” she said.

Celecia Pereira, a lawyer who assists Apoio Ã  Vhida, the country’s first association of people living with HIV, said the documentary alone would not be enough to combat stigma.

“We don’t have any legal instrument to protect the HIV positive from the discrimination they suffer on a daily basis,” she said. “The first thing prospective employers ask for is an HIV test; we live in a country in which everybody knows who does and who doesn’t have AIDS.”