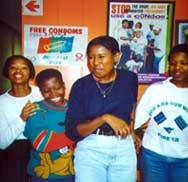 While South Africa’s HIV prevalence rate remains stable at 11 percent, there have been significant reductions in HIV among children and young people.

But the overall HIV infection rate among people aged 15 to 49 has inched up in the last six years, with almost 17 percent of people in this group now infected (from 15.6 percent in 2002).

The most heartening result is the halving of HIV amongst children aged 2 to 14, with only 2.5 percent now living with HIV countrywide. The lowest figure is the Western Cape, where only one percent of children tested had HIV, an indication of the province’s successful prevention of mother-to-child HIV transmission programme.

The ‘substantial decrease’ in HIV infection among teenagers, particularly in the last three years,    coincides with a doubling of knowledge about HIV.

The Western Cape has managed to cut its HIV rate by over half among those aged 15 to 49, from 13.2 percent in 2002 to an impressively low 5.3 percent. The Northern Cape and Free State also showed decreases in HIV.

But the challenges remain huge. HIV is highest among women aged 25 to 29, where one in three are HIV positive. In men, the epidemic peaks among those aged 30 to 34, where one in four is living with HIV.

HIV continues to increase in the two provinces with the highest HIV rates ‘ KwaZulu-Natal and Mpumalanga. In the past six years, HIV has increased by a massive 10 percent in people aged 15 to 49 in KwaZulu (to 25.8 percent). However, there was a slight drop in infections amongst those aged 15 to 24 in the province.

Mpumalanga  is the only province to show an increase in HIV in both the youth (15-24 years) and those aged over 25 and over, perhaps an indication of a weak HIV programme.

In the past three years, risky behaviour has also increased. There has been a substantial increase in girls having partners five or more years older than them (from 9.6% in 2005 to 14.5% in 2008), and a slight increase in girls under the age of 15 having sex ‘ both risk factors for getting HIV.

There has been an almost threefold rise in people in the Free State having two or more partners in the past year, which is also a risk factor.

In addition, HIV/AIDS knowledge among those most at risk of HIV has plummeted ‘ an indication of the failure of government’s Khomanani campaign. Among African women aged 20 to 34, knowledge dropped from 43.8 percent to 26.1 percent and among African men aged 25 to 29, from 40.6 percent to 28 percent.

One in three adults over 50 and over one in nine adults aged 25 to 49 were not reached by any HIV communication campaign.

Some 23 369 people over the age of two were interviewed last year in the countrywide representative survey, which is conducted every three years. However, a quarter of these refused to have an HIV test so prevalence results are based on a sample of some 15 000 people.

Research was conducted by the HSRC, Medical Research Council, Cadre and the National Institute for Communicable Diseases with funding from the President’s Emergency Plan on AIDS Relief (Pepfar).