Call for leaders to continue funding the fight against HIV & TB 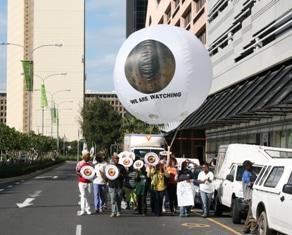 CAPE TOWN ‘ African health and human rights activists have called on leaders attending the World Economic Forum (WEF) meeting on Africa to ‘not use the same pie and split it between more people’, but to make the pie bigger.

Representing a coalition of African HIV and tuberculosis activists, Paula Akugizibwe of the AIDS and Rights Alliance for Southern Africa spelt out their list of demands which includes a challenge to the region’s leaders to guarantee the right to health, ensure that it is financed as a priority, and mobilise the additional resources needed to secure universal access to TB/HIV prevention, treatment and care.

Activists gathered outside the Cape Town International Convention Centre yesterday (WED) where they unveiled a giant, inflatable eyeball, as a symbol of their intention to keep an eye on proceedings at the WEF and remind leaders to fund the fight against HIV and TB.

Akugizibwe pointed out that the current health crisis facing Sub-Saharan Africa had been present long before the global economic meltdown. ‘The economic downturn is merely the final catalyst for disaster,’ she said.

Rebecca Hodes of the Treatment Action Campaign (TAC) revealed that more than 60 000 people were currently on waiting lists for ARVs in KwaZulu-Natal alone while the list in the Eastern Cape stood at more than 15 000 people.

Akugizibwe stressed that there was a critical need for health funding to be prioritized and protected. ‘With stock outs and failure to treat people and prevent disease, governments are simply generating additional costs down the line,’ she said.

The TAC is rolling out a Resources for Health Campaign which aims to eradicate waiting lists for HIV treatment, ensure that both prescribed drugs are made available for the prevention of mother to child transmission and the integration of HIV and TB treatment is radically improved.

Activists will be joining trade union Cosatu in the lunchtime picket outside the WEF today (THURS).

From April 15, everyone attending a clinic or hospital will be offered an HIV test, regardless of whether they have symptoms of the disease or not.

KHAYELITSHA – The tall woman walks from window to window, undoes the latches and flings them open. Next she negotiates her away through the throngs of people sitting on benches against the walls, some collapsed in the laps of their minders, others coughing behind thin, white, paper masks. Children squeal and run around, bored from waiting in the stuffy clinic. A stray dog is shooed away by a security guard. 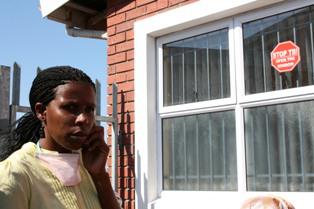