KISUMU:(PlusNews) – Lillian Awiti*, 19, from Kisumu, on Lake Victoria in western Kenya, began her pregnancy optimistically, but soon stopped going for antenatal check-ups after a nurse at her local clinic insulted her.

“She asked where the father of my child is and I told her I do not know; instead of helping me, she just lectured me and accused me of sleeping around with people I cannot even trace,” she said. “It was the last time I set my foot in that hospital – I think some of these nurses need more counselling than we, the sick.”

According to the Kenya Medical Association, only 40 percent of deliveries take place in health facilities. Awiti gave birth with the assistance of a traditional midwife, but her baby died soon after it was born.

Kenya has National Guidelines for Voluntary Counselling and Testing, and for Prevention of Mother-to-Child HIV/AIDS Transmission, but not all health workers have read or been trained to adhere to them.

“The government policy is an opt-out one, and no health worker is allowed to test anybody without their knowledge. If such cases do happen, then it is a contravention of the government policy,” said Dr Irene Mukui, programme officer at the National AIDS and Sexually Transmitted Infection Control Programme in the Ministry of Health.

Researchers from the ACRR found that “These women are reprimanded for bearing children or being sexually active, and denied access to contraception, family planning and maternity services. This discrimination that HIV-positive women experience may increase their risks of transmitting the virus to their partners and children, or unintentionally conceiving.”

A nurse at a government health facility in Nyanza Province, western Kenya, admitted that health workers sometimes mistreated patients, and studies have shown that despite having the country’s highest HIV prevalence, people in Nyanza are the least satisfied with health professionals.

“I have seen cases where some colleagues share the [HIV] status of women publicly in the presence of other patients, and it is not right,” said the nurse, who preferred anonymity. “Health workers are feeling demoralised and the patients are the nearest punching bags they can vent their anger on.”

Caring for the carers

Dr A J Suleh, medical superintendent at Nairobi’s Mbagathi District Hospital and chairman of the Health Rights Advocacy Forum, said cases of abuse could largely be attributed to insufficient health worker training, burnout due to overwork, and poor pay.

“Imagine two nurses attending to over two thousand patients in a day,” he said. “The provision of protective gear for health workers [treating HIV-positive patients] has not been adequately addressed by the government,” which placed them at risk of infection and exacerbated stigma.

Kenyan nurses earn, on average, less than US$300 per month; it is estimated that to provide adequate care to Kenya’s 34 million citizens at least 10,000 more nurses are needed, besides the 25,000 already employed in the public and private health sectors.

The government is taking steps to raise health workers’ awareness of the need for sensitivity to patients. “We cannot deny that there are health care workers who are still exhibiting stigma, especially towards people with HIV/AIDS,” Mukui said. “We are developing a manual that we would use to train health care workers countrywide to reduce cases of stigma.”

Existing treatment and prevention techniques could prevent millions of new HIV infections and deaths from AIDS — but only if Obama sustains funding. By Mark Harrington 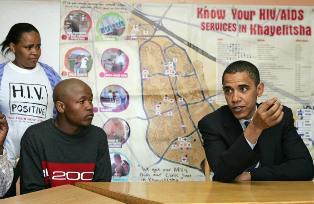 Ramaphosa is hopeful that cleaning up the healthcare system in efforts to protect the NHI Fund will ensure that South Africa reaches universal health coverage.

No action has been taken against 11 health officials implicated in Esidimeni crisis, former Health MEC Qedani Mahlangu who made the decision that led to 141 deaths remains illusive and the “bankrupt” Gauteng Health Department is currently unable to fund a compensation ruling.