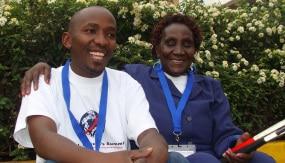 Catherine Mwayonga is a formidable woman: she is a teacher, a grassroots activist, and the mother of six. She is also blind and HIV positive.

Catherine  has been a teacher at the school for the blind in Thika, Kenya for 30 years. She  prepared for last week’s Global Citizen’s Summit on HIV/AIDS in Nairobi by transcribing all the conference material on her Braille typewriter and arriving armed with a thick sheaf of papers. It had taken her three days to type.

As the conference progressed she sat following the agenda, her fingers gliding smoothly across the painstakingly prepared pages, ensuring that the voices of people living with HIV and disability were not forgotten.

In her blue suit Mwayonga (55) may look like a conservative grandmother – but she doesn’t shy away from frank talk. During a discussion on how to promote the use of condoms and femidoms, she challenged other participants as to whether they had even considered the needs of people with disabilities: ‘Don’t leave the disabled women behind! How can we use female condoms properly when we cannot see? Or when we have physical challenges? And why don’t manufacturers put expiry dates on condom packets in Braille? If you have to ask someone else to read the expiry date for you, then it means you have no privacy.’

Catherine  has been campaigning all her life – first for the rights of blind people, and more recently for people living with HIV/AIDS.

‘I was diagnosed HIV positive in 2001. For three years I stigmatised myself. I was in denial.’ Then, through the Kenya Union of the Blind she attended a course in South Africa. ‘I learned to live positively, from drug adherence and nutrition to disclosure and learning to let go of anger and blame.’ She was so inspired that when she got home to Thika she immediately formed her own community based organisation – People Living with Disability Infected and Affected by HIV/Aids (PLDIAH).

Running this organisation is  not an easy task. ‘Most of the members of our group beg on the streets.’ While there is a school for blind people in Thika, most find it almost impossible to get a higher education and end up destitute and vulnerable. The few who do get higher qualifications cannot find jobs.

‘In our group there are 64 people – including orphans and vulnerable children – and of these 42 have disabilities. We have no facilities such as ramps in buildings or Braille in lifts, and it is hard for us to use public transport. And when it comes to voluntary counselling and testing for the deaf, there are no counsellors who know sign language, which means there is no confidentiality’.

And, she says, people with disabilities also face stigma from other HIV postive people: ‘I ask them: is my virus blind while yours can see?’

Breaking the mould is clearly a family tradition: her 27-year-old son Peter accompanied her to the conference and is very outspoken on the issues facing HIV-positive people with disabilities.

While much talk in these circles revolves around the burden of care, which is generally shouldered by women and girls, Peter is emblematic of a new kind of young African man. ‘I am directly affected by both HIV and disability. Both of my parents are blind and I grew up seeing my elder brothers taking care of my parents and I am also passing that knowledge on to my young brothers.’

At the lunch table Peter guides his mother to her seat, fetches her food from the buffet and in what is clearly a comfortable routine puts her plate in front of her and says, ‘Chicken at 3 o’clock, matoke at 6 o’clock, spinach at 9 o’clock. Oh yes, and there’s ice cream for pudding.’

Peter is clearly angry about the raw deal people with disabilities get in Kenya. ‘There are no disabled parliamentarians to push for better policies. When they are campaigning, politicians of every party promise at least one seat will go to a candidate with a disability,  but after the election is over they do nothing. There is a quota that five per cent  of jobs must be filled by disabled people, but it is not implemented.’ He has realised that the only way to effect change is to be the change himself. ‘I have decided to dedicate my life to this cause and work with my mum.’

Reverend Christo Greyling, HIV/AIDS advisor for World Vision in Africa, speaks further with Health-e News about how he has lived with HIV for 20 years and how living with the virus has affected his relationship with his wife of 16 years who remains HIV negative.

Despite promises of payment by the Gauteng Department of Health, some community health workers report that they have not been paid for their work as home-based carers, HIV testing counsellors and peer educators. For some, the delay means they have gone almost five months without pay.