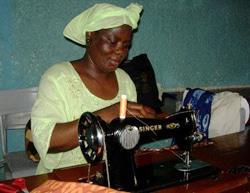 Despite a two-year-old law in Niger penalizing discrimination against people infected with HIV, seropositive women say they still receive substandard health care, are denied employment and risk losing their children because of their status.

‘When a woman is divorced as a result of her HIV status, it is difficult for her to keep her children,’ said Sona SoumarÃ© ContÃ©, president of a local NGO that works with HIV-positive women. “Their husbands are afraid their children will not be well taken care of or will become contaminated.’

Because women are more likely than men to be tested for HIV ‘ testing in Niger is encouraged for pregnant women to prevent mother-to-child transmission ‘ a couple may not know whether the man is infected, said ContÃ©. ‘Men will not even wait to be tested before they serve the woman for divorce. Some of them simply refuse to go to health centres to find out their own status.’

She added that while the right for HIV-positive individuals to marry is not questioned, the procedure for divorces resulting from HIV are not clear and leaves women at risk of being stripped of their belongings and children.

Niger’s April 2007 anti-discrimination law guarantees HIV-positive individuals the right to health care, employment, social security, education, health insurance and freedom of movement. But the law is largely unknown and its application weak, according to Kasoun.

He said while the national HIV prevalence rate is relatively low at 0.7 percent, according to the government’s most recent data gathered in 2002, discrimination against people with HIV remains ‘strong and systematic’ ‘ especially for women.

Founded in 2004, the NGO Bafouneye ‘ meaning life in the local Zarma language ‘ works with HIV-infected widows and divorcÃ©es. The group’s treasurer, Rakia Hassane, told IRIN one of Bafouneye’s members had been refused service at a health centre when delivering a child. ‘When the midwives learned she was HIV-positive, they did not tend to her and she lost her baby.’

NGO president ContÃ© said in addition to helping women negotiate rights with their ex-husbands, the group trains them to start small businesses. Whether women are knitting, fabric-dyeing or tailoring, the real objective is forgetting, said ContÃ©. ‘We are here to help them forget the discrimination they face.’

Given lack of enforcement of the non-discrimination law, the NGO Bafouneye has not had the legal ground to defend its members, said treasurer Hassane. ‘Each time our members suffer human rights abuses in health or social settings, lawyers say they cannot do anything.’

Communications adviser for the government’s council against AIDS and sexually transmitted diseases, Amadou Zoukaleini, told IRIN the 2007 law remains relatively unknown. He said a decree to strengthen enforcement is being drafted and is expected to be presented to the Council of Ministers in September.

‘It is true the law has not been widely applied,’ said Zoukaleini. He said the decree will clarify questions that have held up the law’s application.