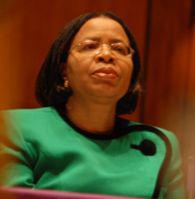 Africa has the largest number of children living with HIV. A campaign launched recently seeks to mobilize political will and financial resources to overcome the bottle-necks that hinder services for children who have HIV and to prevent HIV infection in children.

But that’s just a tiny fraction of the burden of paediatric HIV in Africa. In South Africa alone, 280 000 children are said to be having HIV. It is estimated that 1.8 million of the world’s HIV-positive children are in Africa.

One of CEPA’s goals is to prevent HIV infection from parent to child. Openly HIV-positive TV host and head of Nigeria’s Positive Action for Treatment Access Movement (PATAM), Rolake Odetoyinbo, knows that that can be achieved.

‘The best news I got was in 2006 when I was told that my eight-week old baby was HIV-negative. I had lived with HIV for seven years. I made a conscious decision to get pregnant and have a child knowing that I have a chance of passing the virus. But I dared to believe in science’, Odetoyinbo says of how prevention of mother-to-child anti-retroviral medication help save her baby from HIV infection three years ago.

‘I can deal with my status, but I dare say I’m not sure I would have been able to deal with my child being HIV-infected. And that’s what we are committing to. Can we stop infection in children? Can we speak for the voiceless and say we need to stop our children from getting infected?’, Odetoyinbo pleaded.

The campaign also aims to unblock the bottle-necks that prevent easy access to prevention, treatment and care services for HIV-positive mothers and children. The rigidity of the roles of health care providers is an example of a bottle-neck hampering service provision, says Director of Communications for the Global AIDS Alliance in Washington DC, Skip Morskey.

‘There’s a certain model that says doctors do this, nurses do this, pharmacists do this. But in the context of a very urgent health epidemic, like AIDS and paediatric AIDS in particular, we may need to change some of our assumptions about the best way to dispense medications.

‘We wouldn’t suggest that a doctor’s role be abrogated or be eliminated, but that once the doctor or nurse has made the evaluation, under task-shifting, the job of dispensing medications or renewing prescriptions could be done by a lower level, but qualified health care worker. That’s an example of a bottle-neck and we want to help each country find the mechanism to open up the bottle-necks so that the supply of life-saving medications is available to all who needed them’, Morskey explains.

The campaign, formed by the United States’s Global AIDS Alliance, has set itself a bold target to increase prevention of mother-to-child HIV transmission and paediatric treatment services from the current average of 30 ‘ 40% to 80% in three years in the countries it’s working in. A total budget of $6 million has been set aside to benefit the six countries that are currently being targeted.