Home » Drug use may lead to Schizophrenia 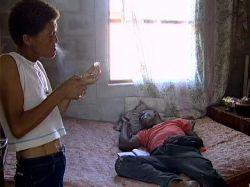 Early use of drugs such as dagga and tik can sometimes trigger the incurable mental illness of Schizophrenia, which can result in life-threatening behaviour.

‘My family first realised that I was not well after I jumped out of a moving train on my way back from school. Once I got home, I scrubbed my fore-head with a pot scraper. I bled profusely, but I never felt any pain’, says 19 year-old Yongama Madubela.

This was one of the early symptoms to show that he had Schizophrenia. Yongama admits that he started using drugs when he was very young, but he doesn’t recall exactly when he started using hard drugs.

‘I first experimented with rock. But, I stopped using it and opted for tik because rock was too expensive for me. For example, the smallest piece could cost you R50, the bigger the piece the higher the price. A large piece, which is the size of a soft drink bottle cap, could cost as much as R1000, and that is called the ‘full moon’’, he says illustrating with his small hands.

Yongama is part of a study conducted by Dr Bonga Chiliza of the Department of Psychiatry at Stellenbosch University, in the Western Cape.

He says ‘Schizophrenia is a severe psychotic brain disorder that is characterised by distortions of reality, such as hearing voices, which in some instances, could include intrusive thoughts of others wanting to kill the affected person’.

Zuko (not his real name) is 24 years old and is also part of the study. He was diagnosed with Schizophrenia in 2007 after abusing dagga since he was 15 years-old.

‘I received psychiatric intervention after I burned down my house one evening trying to get rid of voices I was hearing all over my house that wouldn’t go away. My neighbours came to my rescue and tied me up before transporting me to Stikland Psychiatric Hospital’, he says.

Brain damage caused by early use of drugs is irreversible and Schizophrenia cannot be cured. However, symptoms can be reduced significantly with treatment.

Dr Chiliza says there are various factors such as genetic predisposition and head injury that may cause Schizophrenia. However, those who abuse drugs are at an increased risk of developing the mental condition.

‘There is no single cause of Schizophrenia. But, if you use dagga or tik from a very early age, your chances of developing Schizophrenia are highly increased’, he says.