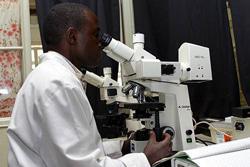 JOHANNESBURG: (PlusNews) – A new technology being pioneered in South Africa may make screening for tuberculosis (TB) faster, cheaper and more reliable ‘ and it’s all based on technology found on a typical trip through airport security.

The new computer diagnostic system known as TBDx takes digital pictures of sputum samples and searches them for TB’s structural ‘fingerprint.’ Some airport scanners work in much the same way, searching luggage for the structural fingerprints of plastic explosives, for example.

The system is being pioneered by health research organisation, the Aurum Institute in partnership with South Africa’s National Health Laboratory Services (NHLS) and imaging specialists, Guardian Technologies International, and is the first in the world to pair advanced imaging technology with a digital microscope.

A prototype is already in the works and once fully automated will be able to run independently 24-hours a day. It has already proven 10 percent more effective at identifying TB bacilli than conventional TB tests which rely on laboratory technicians to manually load slides and look for the bacilli under a microscope.

With its combination of sensitive diagnostic technology and labour-saving automation, TBDx could revolutionize TB testing in high burden countries like South Africa that have seen a resurgence of TB in the last decade on the back of the HIV/AIDS epidemic.

About 70 percent of South Africans diagnosed with TB are co-infected with HIV and, despite being curable, the disease is the country’s leading natural cause of death and one of the main factors behind South Africa’s declining life expectancy.

He noted that current methods of TB diagnosis continue to rely on technology developed by Robert Koch, the German physicist who discovered TB a century ago. ‘If we were going to fight a war today with equipment we used 100 years ago, we’d be mad,’ he said.

TBDx can be operated by personnel with no special skills, freeing up a scarce supply of lab technicians to do other important work. It may also greatly improve working conditions for lab technicians who currently spend hours hunched over microscopes searching for tiny TB bacilli.

‘Out of 100 slides that come to you…maybe  six percent will be positive,” said Clark, describing work in a high-volume laboratory. ‘The rest of your day is spent searching for something that isn’t there. These are highly trained technicians that could be doing other things.’

The new technology does not entirely do away with the need for skilled technicians. It can be set to flag slides that are difficult to diagnose ‘ a function that Clark described as a potentially valuable training tool.

South Africa’s NHLS is waiting for the new technology to be costed before making a decision about whether to adopt it nationally, but TBDx is likely to be more cost effective than the current labour-intensive method of TB testing which costs about US$3 per slide.

‘We will have to do the operational research and cost-effectiveness studies, but it’s very promising,’ said Gerrit Coetzee, head of the National TB Reference Laboratory of the NHLS. He added that TBDx’s potential to increase lab productivity, and improve and standardise diagnosis were among its main draws.

If the NHLS does choose to adopt the technology, a national rollout is still at least three years away, according to Coetzee. The system would most likely be piloted in high volume laboratories before being scaled-down for use at lower levels of the health system.