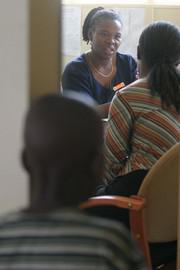 JOHANNESBURG: (PlusNews) – A study finding that foreigners are about half as likely to fail antiretroviral (ARV) treatment as South African citizens attending the same Johannesburg clinic has challenged widely held assumptions about migrants’ ability to adhere to HIV/AIDS drug regimens.

South Africa hosts large numbers of asylum seekers, refugees and undocumented migrants from the rest of the continent, but HIV treatment requires almost 100 percent adherence to avoid the development of drug resistance, and it was thought that their high levels of mobility made these population groups poor candidates for treatment.

Until recently, only those with South African identity documents were eligible for ARV treatment at public sector facilities. Although the South African government has instructed public sector facilities to stop restricting ARVs to foreigners, many are still turned away and end up at non-governmental clinics such as Nazareth House, a Catholic mission in the Johannesburg suburb of Yeoville, which provides ARVs using funding from the US President’s Emergency Fund for AIDS Relief (PEPFAR).

Researchers at the University of the Witwatersrand’s Reproductive Health and HIV Research Unit, and its Forced Migration Studies Programme, reviewed the records of 431 South African, 568 foreign and 298 patients of unknown origin who enrolled in ARV treatment at Nazareth House between April 2004 and March 2007.

They found that although foreigners tended to start treatment with lower CD4 cell counts (a measure of immune system strength), they had fewer hospital admissions, missed fewer clinic appointments, were less likely to drop out of care, and had significantly better survival rates than South African patients.

“The good response to ART [antiretroviral treatment] among foreigners in this cohort is particularly surprising, given the obstacles they encounter in living in inner-city Johannesburg and in adhering to ART,” wrote the researchers in an article summarising their findings, published in the December 2009 issue of the International Journal of STD (Sexually Transmitted Disease) and AIDS (IJSA).

Jo Vearey, a researcher at the Forced Migration Studies Programme who worked on the study, speculated that the lower CD4 cell count among the foreign patients probably said something about “their journey to accessing treatment”, which in many cases would have started with being turned away from public health facilities.

Why foreigners were more likely to stick to their treatment was less clear. The IJSA article theorised that HIV-positive foreigners might have “a greater degree of tenacity and determination to obtain health care” than citizens.

It also noted that that “the natural history of HIV disease may differ in foreigners”, and that the spectrum of opportunistic diseases differed, with South Africans more likely to contract tuberculosis and foreigners more prone to Kaposi’s sarcoma.

“I think we need to do more qualitative research to understand [these findings],” said Vearey. “But it supports other findings about the resilience of migrant communities, [and] their stronger social networks. I think it’s something we need to learn from in terms of ART treatment ‘ what characteristics do they have socially that enabled them to adhere better?”

Vearey suggested that countries like Zimbabwe, which accounted for most of the foreign patients at Nazareth House, also had a history of their governments being more open in discussing HIV and AIDS than South Africa’s, and this may have played a role in the different adherence rates.

The study findings will be used to support efforts by the United Nations High Commission for Refugees (UNHCR) and the Southern African HIV Clinicians Society to ensure that foreigners in South Africa and elsewhere receive the same access to ART as local residents.

“Health is such a political subject that when we can present evidence that challenges assumptions, it really does help,” said Vearey.