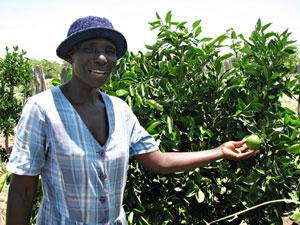 Lush food gardens set up by an Oxfam partner have been a lifeline for communities in Matabeleland, Zimbabwe, in the recent economic hardships.

The Matobo district of Matabeleland has some of the world’s most spectacular scenery, full of massive granite boulders balancing in improbable formations and with views so breathtaking that Cecil John Rhodes insisted on being buried there.

It is also home to some incredibly resourceful people, determined to take the lemons life has handed them and make lemonade. The area is traditionally arid but has become even drier in the past decade, with drought following drought, putting strain on communities whose primary livelihood is agriculture.

Tshelenyemba village is on the banks of the Shashane, a ‘sand river’ that flows for only a few weeks a year, forcing people to dig beneath the sand to extract water in the dry season. Yet the Bhekimpilo (‘care for health/life’) food garden is an oasis of lush greenery, filled with tender veggies and delicious fruit. The project is the brainchild of the Dabane Trust, an Oxfam partner which aims to ensure the community not only has a sustainable supply of food but also takes charge of their own health, particularly around HIV. We grow the gardens so we can have a better life,’ says Attah Moyo, the chairperson of the garden project.

‘We used to each have our own garden with brushwood fences but the animals used to destroy them and eat our crops. Now we all farm in one big garden that has a proper wire fence, so our crops are safe.’

The project has also introduced a well point and hand pump that allows water to be drawn up from the riverbed to irrigate the gardens.Aggie Ncube, a member of the project, explains how they have planted spinach, carrots, beetroot, onions, sweet potatoes and oranges. ‘These veggies have helped us so much. Look at my skin,’ she says with a wink. ‘I am looking good!’

‘We now eat fresh vegetables every day so we don’t have to buy from the shops. I can use that money to send my children to school and buy uniforms. We also donate some of our crops to people living with HIV and to the local schools,’ she adds.

The project also provides training on HIV and gender to its members. ‘I learned that we need to know our status, which foods we should eat and also about using condoms,’ says Silendeni Mvundla. ‘It is difficult to talk about condoms with our husbands but because this is about our life and that of our children, we speak to them and agree to test [for HIV]’.

Her friend Chipo Sibanda chips in proudly: ‘Our men have been empowered now, so they can go test!’

A couple of kilometres down the road is the Mpumelelo (‘progress’) garden, another Dabane Trust project. For the members of this community the garden has been a lifeline in the recent economic hardships. ‘Even though it has been difficult times in Zimbabwe, we have been able to feed ourselves and also to help our neighbours and extended family,’ says Medium Maphosa, chairman of the project.

The project has also provided a buffer for the community after the collapse of the Zimbabwe dollar and the adoption of the US dollar, a move that saw many rural communities struggling to access hard currency to buy basic commodities.

‘It is difficult to get that currency so I am lucky I had vegetables to sell. Last year I grew lots of very nice tomatoes, so I could buy sugar and tea and pay for school fees. I have five children at school but I have been able to pay their fees even in these difficulties,’ says Teresa Ncube.

The project also allows the community to care for people affected by HIV. ‘There are so many orphans and old people so we are able to provide them with vegetables, we help with household chores like cleaning and we also provide moral support,’ explains Linda Moyo.

Community members say the training provided by Dabane Trust on HIV/Aids has helped the community face issues of stigma and allowed them to rally around and provide support to those who need it.

‘HIV has affected so many people, not just physically but emotionally,’ says Sibusisiwe Nkomo. ‘We take them food to ensure they eat properly, but we also make sure they feel loved and cared for.’