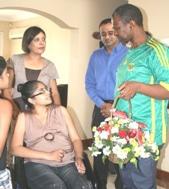 Dr Nerissa Pather, the doctor confined to a wheelchair after contracting drug-resistant TB meningitis, will be immediately reinstated on the KwaZulu-Natal health department pay roll.

This is the outcome of a meeting between provincial health MEC Dr Sibongiseni Dhlomo and Pather and her family.

Pather contracted TB eight years while doing her community service at KwaMashu Clinic, which falls under King Edward Hospital. However, she has yet to receive any compensation and four years ago, the hospital stopped paying her salary describing her as a ‘ghost’ in the system.

Heath-e highlighted Pather’s plight in a documentary screened on SABC 3’s Special Assignment programme a day before TB day. As a result of the programme, MEC Dhlomo visited Pather and her family a few days’ later (Friday 26 March).

‘I have put the family in touch with the CEO of King Edward Hospital and it is a matter of quickly reversing her removal from the [pay roll] system,’ said the MEC.

‘Dr Pather’s situation is tragic. Here was a young doctor, excited about life, who gave birth in 2002 and in the same year, she got this tragic infection and is now confined to a wheelchair and constantly in pain,’ said Dr Dhlomo.

‘She has paid the highest price any health professional can pay for our country and its patients,’ said the MEC, adding that he planned to raise her case in his forthcoming Budget speech.

Dhlomo added that, as a medical doctor himself, Pather’s situation had made him realise how lucky he was: ‘I have seen so many patients with TB and I could have contracted drug-resistant TB.’

Pather’s husband, Shane Maharaj, is also a medical doctor. He described Dhlomo’s visit as ‘God working through Special Assignment’, and said he had used the opportunity to highlight to the MEC the dangers being faced by healthcare professionals.

‘It’s not about money. No amount of compensation will ever be able to compensate for what we have lost,’ said Dr Maharaj.

‘I hope that, through Nerissa, government will now be more aware of the risks being faced by healthworkers and take steps to protect them better. Government must ensure that TB patients are kept separately from other patients.’

Dhlomo conceded that patients had contracted drug-resistant TB from hospitals but that protocols were now in place to control TB infection better: ‘We saw, with the outbreak of extensively drug-resistant (XDR) TB in Msinga, how patients might go into hospital with a fracture and go home with XDR from the wards,’ said Dhlomo.

‘Infectious diseases have overwhelmed our country, and here in KwaZulu-Natal we face the worst burden of HIV and TB.’

Pather’s mother, Dhannes, wept openly as she thanked the MEC for his visit. She gave up work eight years ago to take care of her daughter, thinking that it would be a temporary break.

‘For the past eight years, I have been here every day, taking my grandchild to school and back and looking after Nerissa,’ said Dhannes.

‘Some days she is on so much pain she just screams. Shane had to give her a pain injection before the MEC arrived so that she was able to meet and speak to him.’ ‘ Health-e News Service.