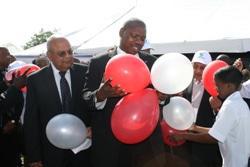 There was a festive atmosphere at Edendale Hospital on Friday as hundreds of people attended the launch of the province’s HIV counselling and testing (HCT) campaign, headed by Premier Zweli Mkhize.

‘This is a very important day as it signals a new approach to HIV management. We are moving HIV from being a private issue to one where the whole community takes responsibility for fighting it,’ said Mkhize shortly before he took an HIV test.

While Mkhize allowed the media to witness his HIV test, he said he would not make the results public.

President Zuma, who launched the national HCT campaign last weekend, chose to make public that he was HIV negative but stressed that the aim of the campaign was not to make people disclose their status.

Minister Gordhan, who also had an HIV test, said he was an ‘enthusiastic supporter of [health minister] Dr Aaron Motsoaledi’s campaign to take the fight against HIV to a grassroots level’.

‘We need to shift from treatment to prevention. Everyone must have an HIV test as we need to ensure new awareness of HIV/AIDS so that the next generation of South Africans does not suffer like the last,’ said Gordhan.

‘It is good to be part of a social movement, to mobilise society against HIV and take joint responsibility for addressing it instead of it being an individual burden,’ he added.

After taking his test, Mkhize addressed a crowd of almost 1000 people who had gathered in a large marquee in front of the hospital.

‘People must not hide HIV and pretend the symptoms are something else’¦ they must not lie to their partners. Men must not sleep around,’ said the Premier to roars of approval from the crowd.

He also urged all men aged 15 and above to opt for medical circumcision, which research has  shown to reduce a man’s risk of HIV by up to 60 percent.

‘The king and amakhosi are behind male circumcision and we have already circumcised 500 men. We aim to reach two million in the next year,’ said Mhkize.

Earlier, Mkhize had met a group of 30 young men who were waiting to be circumcised as part of the provincial campaign against HIV.

Siyabonga Mhlongo (21) said he wanted to be circumcised because it could keep him ‘safe’.

‘I heard on the radio that circumcision can prevent HIV by 60 percent, so it’s a good thing to do. My girlfriend knows that I am coming here and she has encouraged me. They say we will have three months of pain but it will be worth it,’ said Mhlongo.

Eighteen-year-old Sabelo Buthelezi said his mother had encouraged him to get circumcised and he was looking forward to ‘better protection against HIV and other STIs’.

Amid drum majorettes, music and balloons, hundreds of people lined up outside little tents to get tested for HIV, as well as TB, diabetes and high blood pressure.

Mayor Yusuf Bhamjee described them as ‘soldiers in the fight against HIV’, and urged them to spread the message to other districts to counter the ‘denial in the past’.