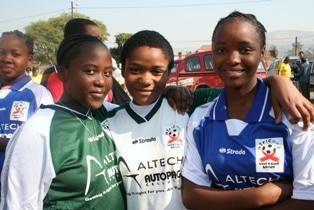 The average school kid tends roll their eyes when HIV is mentioned, yet thousands of pupils in Edendale have been learning valuable life skills while learning to play soccer.

Whizzkids United is the brainchild of HIV nurse Marcus McGulvery, who realised early on that a dynamic approach was needed to reach young people in the province most devastated by HIV/AIDS.

‘We are the only organisation in the world to use the game of football as a metaphor for life,’ says the UK-born McGulvery, who has been working in KwaZulu-Natal for the past seven years.

McGulvery started out in KwaZulu-Natal by developing a patient literacy programme to help the health department to roll out antiretroviral treatment.

‘But all the focus was on treatment and people had forgotten about prevention. I decided to rejuvenate HIV prevention,’ says McGulvery.

At that stage, McGulvery had already started his own charity organisation, Africaid, and had set up an HIV/AIDS clinic aimed at serving young people in northern Ghana.

‘At first, we were using normal classroom methods to educate young people about HIV, and it was a bit boring,’ admits McGulvery.

‘Then South Africa won the bid to host the World Cup, and we decided to reach young people,    using elements of the game. Girls and boys play together and the girls love it. They’ve never been given the chance to play football.’

Thuthukile Mbona, 13, said she had been involved with Whizzkids since 2008: ‘It has taught me a lot of things about HIV and how to protect myself. We play with the boys but they are OK with us.’

Ten hours of life skills aimed at developing children personally, socially and physically, as well as equipping them with knowledge about how to protect themselves from HIV infection, are woven into soccer coaching.

At first, they play soccer without goalposts. ‘This is chaotic, and the kids realise that they have to have goals in life because they need direction and purpose instead of just running around.

‘Then we add the goalposts and encourage the teams to work together and practice, both as individuals and as a team, in order to succeed. They learn to turn and pass, to get support when they need it ‘ as they have to do in life.’

Each position in the game is broken down and pupils are chosen on the basis of their ability.

Every pupil who completes the life skills training has the chance to take part in a ‘World Cup’ tournament where teams get soccer kit and play against one another in six-aside matches. A big part of Whizzkids’ teaching   is aimed at breaking down gender stereotypes. So each team has to have three girls and three boys.

‘At first the boys grumble, but they soon accept that they have to play with girls and work with them to improve their skills,’ says McGulvery.

Lindo Mkhize, 17, said he enjoyed Whizzkids because it had improved his soccer ‘and they gave us very nice jerseys. They also told us how to look after ourselves.’

One boy and one girl from every class are also selected as ‘peer educators’. They are given more education and conduct lifeskills classes with their classmates for another 12 hours.

Whizzkids’ work in Edendale reached a new height last week with the opening of the Whizzkids United Health Academy in the grounds of Edendale Hospital.

The modest building near the hospital entrance aims to provide health services for young people aged from 10 to 22 years of age, as well as homework clubs and a small soccer pitch.

‘Through our work with over 7000 children in Edendale, we have been shocked by how many have been raped. The health academy will also give these girls proper support,’ said McGulvery.

At the launch of the academy, Edendale Hospital’s CEO Z Ndwandwe expressed her gratitude to Whizzkids for bringing resources to the community to ‘help the young people’.

Whizzkids United also operates in Ghana and Uganda. The African success will soon be imported to McGulvery’s home country, the UK.

‘From 2002, HIV has been increasing among young heterosexual couples in the UK. We also have the highest teen pregnancy rate in Europe.

‘We have been piloting Whizzkids with Manchester United, Arsenal, Aston Villa, Blackburn Rovers and Charleton Athletic and it will be launching at the House of Commons on 16 June,’ said McGulvery.