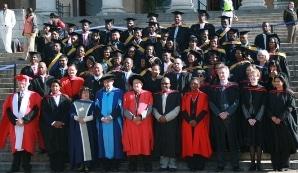 Dr Bongile Mabilane, one of the 40 doctors that graduated at the University of Cape Town this week as part of the South Africa-Cuba cooperation agreement programme said she was committed to giving her all to her profession.

Mabilane said her training in Cuba has helped her to better understand her role in revitalising the health care system in this country.

She said the attitude of health care workers was one the issues that would need to be dealt with for health care in South Africa to improve.

‘Our attitude as doctors needs to change.  We need to come to terms with whether this is a calling or a business,’ she said.

The graduates were part of a six year programme initiated by South Africa and Cuba in an effort to address human resources shortages within the South African public health care system.

In the 1990s South African and Cuban governments signed an agreement which saw Cuban doctors working in South Africa and young South Africans from underprivileged areas being sent to Cuba to train as doctors.

Since the start of the programme 246 medical doctors have been trained and sent health facilities in rural areas. Over 300 are currently receiving training in three universities in Cuba.

Addressing the graduates yesterday, health minister Dr Aaron Motsoaledi urged the group to restore the values and ethics of their profession.

Motsoaledi urged the doctors to be agents of change.

‘One of the critical challenges facing us as a sector is the low morale and caring ethos of our health professionals and I urge you young graduates to be agents of change wherever you find yourselves allocated,’ he said.

Dr Mzulungile Nodikida, one of the graduates already working in the Eastern Cape, said he would like to see the country’s health system becoming more preventative.

Nodikida warned doctors against being motivated by money.

‘We noted that in Cuba the money that patients pay is not as important as the health of the people. As doctors that is something that should come naturally. When one goes to medical school it should not be because you want to make money out of it even if you go private. The key thing should be the health of our people,’ he said.

He added that doctors in Cuba were not as highly paid as in South Africa.

Nodikida said he and a group of his colleagues were sharing with government their solutions for the ailing health care system.

‘If you look at some of the policy documents from Cuba and the South African health departments you would swear they were from the same country but then the problem again is implementation of the programmes. We would really like to assist the department in implementing the programmes,’ he said.