Home » Hospital battles to help the most helpless of patients 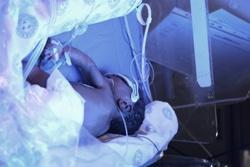 A row of tiny babies, many premature and weighing less than a kilogramme, lie under blue ultraviolet lights. Feeding tubes snake into their little noses while others are fed intravenously.

Hospital battles to help the most helpless of patients

One cries incessantly, his stick limbs twisting feebly as he lies immobilised on his back.

This is Greys Hospital’s nursery, the last high care ward left open in the city for desperately ill newborns.

There are 81 children and babies being treated at Greys. One 21-bed ward is closed as is the intensive care unit (ICU).   Only the desperately sick remain inside.

Doctors are under pressure to treat and discharge the babies as fast as they can, as other babies are waiting to get into the facility.

‘We need to get someone to take that baby back to Newcastle, to make way for that 32-weeker,’ a doctor says to his colleague, referring to a newborn baby born eight weeks too early who needs urgent care.

A few more nurses have turned up for work today than last week (Tuesday), much to the relief of the doctors who have been working 12-hour shifts and are starting to look sickly themselves.

The health workers agree to talk to Health-e as long as they are not identified.

‘It is unpredictable whether the nurses will arrive so we have organised 12-hour shifts,’ says a doctor. ‘We are very pleased if we see any nurses because on Friday no nurses could get through. Last week, two sisters and two mothers were assaulted by strikers.’

While many patients have been discharged, this isn’t an option for mothers giving birth and sick children.

The doctors have risen to the challenge, assuming responsibility for a range of logistical issues such as co-ordinating laundry, food, cleaning and transport as well as clinical care.

Since the weekend, seven teams of volunteers have been formed ‘ one for each day of the week. Their team leader is phoned if they are needed.

Many of the little patients have been transferred from Edendale Hospital which yesterday resembled a ghost-institution with only two adult wards open and very few nurses on duty despite a heavy police presence.

Paediatricians from Edendale have joined forces with the Greys doctors and a handful of nurses to care for the babies.

‘I came here from Edendale last week,’ says Mbali. ‘My baby was very sick with diarrhoea. Sometimes we were the only ones inside here with our babies. It was bad.’

One young Edendale mother feeds her premature baby with a syringe as it is too weak to suck: ‘The doctors are doing their best but it is hard because we are far from our families and they can’t give us support,’ she says.

Most of the mothers are being accommodated at the hospital and are being fed there.

A nurse, who said she only managed to be at work as she came ‘very early’ said ‘they must just settle this strike because we can’t stand leaving our little patients’.

‘We are scared to come to work and sometimes we can’t come inside because of the protestors. But people mustn’t think we are relaxing at home.

‘I support the struggle for better wages, but we haven’t been given an option about the strike. Why couldn’t the strike leaders co-ordinate this so that some of us could stay inside and protect the patients?’

Meanwhile, a striker who sjambokked staff   who were working at Edendale Hospital last week was himself assaulted yesterday.

‘It had to happen after what he did,’ said a source at the hospital.

There was a heavy police presence at Edendale, with five police vans at the gate. Around 40 patients were waiting to collect their antiretroviral medication,   but otherwise the hospital was very quiet. Only two wards, one male and one female, was still functioning.