Home » Where have all the patients gone? 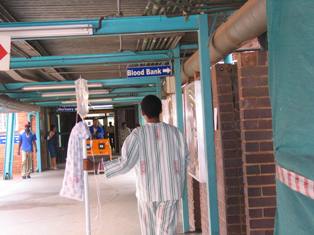 Analysis of five years of antiretroviral treatment in the state sector has found that the number of South African patients who were lost to follow-up or could not be traced has rapidly increased from 1% in 2002 to 24% in 2007.

It also found that the longer patients were on treatment the more likely they were to appear lost from the treatment programme.

Published in the journal AIDS, the study focused on antiretroviral treatment sites in the Western Cape, Free State, Gauteng and KwaZulu-Natal and included 44 177 HIV-positive patients who initiated treatment at the chosen sites between 2002 and 2007. This represented about 10% of all patients enrolled nationally over this period.

The average age of the patients was 35 and 68% of them were women. The analysis also revealed that the average CD4 cell count was 103 while 27% of patients had a CD4 count below 50. The CD4 count measures how many CD4 cells there are in a drop of blood ‘ the more there are the better with most patients measuring CD4 counts above 350 considered to be healthy and not in need of antiretrovirals. However, anything below 200 is considered dangerous.

Enrolment onto the programmes increased rapidly from 1 173 in 2002/3 to 14 728 in 2007. ‘With each successive year of the programme, patients were enrolled at older ages and with less advanced HIV disease,’ said the researchers from several South African universities, among others.

The increase is being viewed as an incredible achievement at a time when the health system was and still is facing a multitude of other pressures.

However, further research was needed to differentiate between patients who were truly lost and had stopped their treatment and others whose movements in and out of care may not have been adequately recorded within the administrative system.

The researchers said they were concerned over the steadily increasing attrition, increasingly due to loss to follow up. The rapid and massive increase in patients placed considerable strain on already overburdened health services.   Large ART programmes undergoing rapid scale-up services must find innovative ways of monitoring and retaining patients in care.

Lead researcher Morna Cornell said: “It’s important to realise that providing ART is probably the biggest public health initiative ever undertaken, and it’s being done in countries facing multiple challenges to their health systems. So the first message is to recognise a huge achievement: the size of SA’s programme, and the speed with which it has scaled up. The new challenge is to find ways to keep patients in long term care.”