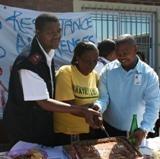 Xoliswa Majola *(37) is living proof that XDR TB can be cured and that a patient can been successfully treated on an outpatient basis ‘ Majola remained at home for the largest part of her two year treatment and went to the clinic every day to receive her treatment.

Majola, who celebrated and danced at the party, said the road to recovery was tough, but ‘patience and perseverance’ kept her going since her diagnosis two years ago.

‘At first I was told I had TB, later multi-drug resistant TB and eventually XDR. I took three months of TB treatment then four months of MDR treatment. I later learnt I had to take two years of XDR treatment, but I managed,’ she said.

Majola said accepting the diagnosis was hard: ‘I immediately thought I would die. When my friends heard that I had gone to Brooklyn Chest Clinic, where I stayed for six months, they said I was not going to come back,’

‘News on television and in newspapers convinced me that those with XDR TB had a killer disease, but I now realise that people don’t have the correct information about XDR TB,’ she said.

Majola said lack of information created fear among many patients and that she would not have survived without the support of her treatment adherence counsellor Busi Beko, herself a survivor of drug-resistant TB.

A beaming Beko took great pride in Majola’s success. ‘It is good that patients can now realise that XDR TB is not a death sentence. A diagnosis with XDR TB doesn’t simply mean they will die. Today they are looking at a person they have known for a long time who was diagnosed right in front of them. They can’t say she was paid to say so. They can see that she is alive and well,’ said Beko, who is employed by MÃ©decins Sans FrontiÃ¨res (MSF).

Hughes said Majola showed that decentralising TB treatment, including XDR, worked and ‘patients didn’t have to spend months in the hospitals away from their families’.

Hughes the support of their families, support groups, clinics and the community during their time on treatment was critical for patients.

Majola urged those that had been diagnosed with XDT TB to treat it like all the other forms of TB.

‘The only difference is the time it takes to finish treatment and the kind of treatment.’

She said people needed to adhere ‘not only for themselves but for the communities they live in’.

According to MSF the Western Cape has the highest incidence of TB in the country with an incidence over 900 per 100 000 people per year.

*Majola is Xoliswa’s clan name her surname is Harmans