30th November 2010 | Kerry Cullinan
The Zulu King has invited the almost 18,000 men who have been circumsized in KwaZulu-Natal this year to form a special regiment to fight HIV and women and child abuse.

The Zulu King has invited the almost 18,000 men who have been circumsized in KwaZulu-Natal this year to form a special regiment to fight HIV and women and child abuse.

The regiment will be established this month (Dec) at the annual uMkhosi wokweshwama (first fruit ceremony) held at King Goodwill Zwelithini’s palace.

KwaZulu-Natal is leading the mass roll-out of male medical circumcision in the country after studies found that circumcision cut men’s risk of HIV by some 50 percent.

Traditional male circumcision was abolished in KwaZulu-Natal by King Shaka, apparently because he could not afford to let his warriors take time off for the ritual.

However, it was reintroduced in the province by King Zwelithini in April this year in a bid to prevent the spread of HIV in the country’s worst hit province.

The province has been circumcising boys from the age of 15 and men at health facilities as well as at special weekend camps run together with traditional leaders.

A recent reportback by provincial authorities to the King was told that 17,690 men had been circumcised between April and November.

However, provincial Premier Zweli Mkhize cautioned that ‘care must be taken to ensure that men and women understand that the procedure does not provide complete protection against HIV infection’.

‘Male circumcision must be considered as just one element of a comprehensive HIV prevention package that includes the correct and consistent use of male or female condoms, reductions in the number of sexual partners, delaying the onset of sexual relations and abstaining from penetrative sex,’ Mkhize told the reportback meeting.’¨’¨

Nationally, the health department has declared that medical male circumcision is part of its HIV prevention campaign and a wide variety of groups have been involved in promoting it.

Health Minister Dr Aaron Motsoaledi is very supportive of KwaZulu-Natal’s campaign and has called on other provinces to replicate it.

However, the mass male circumcision campaign has courted controversy by using a plastic device called the Tara Klamp in some circumcisions instead of the traditional forceps method. This has been heavily criticised by a number of doctors and the Treatment Action Campaign (TAC) for being more painful and increasing the risk of infection.

Sir Elton John today (23 March) announced from Cape Town, South Africa, the granting of a £984,000 award to mothers2mothers (m2m) to be used to help prevent hundreds of thousands of babies across Africa from contracting HIV and empowering mothers living with HIV. 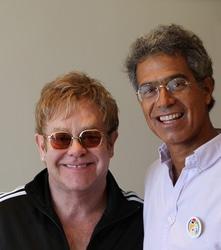 Two thirds of all patients taking one of the newest and most revolutionary anti-tuberculosis (TB) drugs, bedaquiline, in the world are in South Africa.

South Africa’s youth have given the animated Scrutinize HIV prevention campaign the thumbs up.