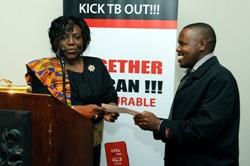 In a profession often marred by disillusionment, poor resources and negative publicity, some nurses still manage to uphold their ethics and even risk their lives by working in highly infectious environments.

Receiving the award on World TB Day last week Mhlope said he was thrilled by the recognition not only for himself, but for his team at Thulasizwe, a 106 bed hospital with a staff complement of 216.

This annual award recognises nursing expertise and intends to motivate nurses working with those affected by TB and MDR-TB.   It showcases the contribution made by nurses to TB prevention, care and treatment.   It also offers the recipients an educational grant to continue their professional development and a specially designed medal. Recipients from across the world are selected by their national nurses association.

Mhlophe is an operational manager for the extensively drug-resistant (XDR)-TB male ward, acting infection control manager and a disaster management coordinator for the hospital, tasks he was praised for handling with ‘excellence and passion’, according to the Deputy Nursing Manager at Thulasizwe Hospital, Patricia Mthabela.

Mhlophe says his patients have given him the name ‘Ncwadi’, which means book in English because he always has answers to their concerns or questions.  ‘The patients in my ward have become my friends because I spend so much time with them,’ he said. ‘Nurses should recognize patient rights, if you fail to do so, they will hit back.’   He added that a nurse’s positive behaviour is mostly reciprocated by a positive attitude from patients.

Mhlophe believes that he received the award because of his workload and his attitude towards patients.   ‘I always bring myself to the level of the patients, irrespective of their culture or beliefs, they are human beings. Some of our patients spend 24 months in our hospital and it is our duty to make sure they adhere to treatment and are made as comfortable as possible,’ he said.

‘The award is not only for him, it is for the entire hospital, but he deserved the award because of his dedication, commitment and his capability for being a team builder,’ Mthabela said.   She said most nurses were afraid to work with MDR/XDR patients, but that was the least of Mhlophe’s concerns.

Asked about what motivates him, Mhlophe said, ‘Seeing patients improve because of my day to day interventions, management’s ability to develop me and their flexible and approachable nature.’

Mhlope started working at the hospital in 1996 as a staff nurse but studied and worked himself up to the level of a professional nurse.   On average he works a 10 hour day shift in an XDR ward and says he takes the necessary precautions to protect himself against possible infection.   ‘I do worry about being infected but I believe in a good healthy diet and exercise to boost my immune system,’ Mhlophe said.

The hospital CEO, Bonginkosi Dlamini said they were happy to receive the award and hoped that it would encourage other nurses in the hospital.   Mhlophe was the first nurse to win such an award at Thulasizwe Hospital.

The award is given annually on the occasion of World TB Day by the ICN in partnership with Eli Lilly, a pharmaceutical company.   This year it has given awards to fifteen nurses, from eleven countries, who through their dedication, passion and innovative care strategies excelled in caring for TB patients.

Read part 3 of a diary that was kept by a TB patient, Lungi Langa as she describes her journey toward recovery from TB. 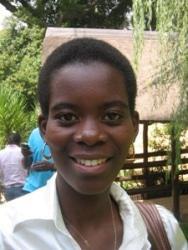 Ekurhuleni Metropolitan Municipality hopes that by partnering with non-governmental organisations (NGOs), it can reach ambitious targets laid out in the country’s national HIV and tuberculosis (TB) plan.