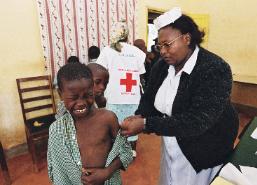 The South African Nursing Council (SANC) is standing in the way of foreign nurses working in South Africa, according to Saul Kornik, head of Africa Health Placements (AHP).

The non-profit AHP has placed 2000 foreign healthworkers, including 1000 doctors, in public hospitals in the country over the past five years.

‘But the number of nurses we have placed is less than the fingers on my one hand because of the policies and bureaucracy of the SA Nursing Council,’ Kornik told the SA AIDS Conference yesterday.

‘The stumbling block is always SANC. They make it as difficult as possible for foreign nurses to work in South Africa and, in doing so, they do poor mainly rural patients a great disservice,’ said Kornik.

South Africa is desperately short of nurses, which are the backbone of our health system.

At the end of March 2010, the vacancy rate was 42 percent, with 109 075 more nurses needed, according to data from government’s Personnel Salary system, PERSAL. In Limpopo and the Eastern Cape, only around one third of professional nurses’ posts are filled.

Despite the shortages, Kornik said some foreign nurses had to wait over two years for their applications to be processed, often the SANC lost their applications and they were forced to come to South Africa to write entrance exams.

‘We have been trying to negotiate amemorandum of understanding with SANC for the past 18 months to enable us to work with them in the same way that we work with the Health Professions Council of SA over foreign doctors’ registrations, but we are getting nowhere,’ said Kornik.

The HPCSA was prepared, for example, to register doctors from certain countries without requiring them to write a South African exam but the SANC would not exempt any foreign nurses ‘even if they were trained at Harvard University and had 40 years’ experience’, he added.

Although Mabuva could not say offhand howmany foreign nurses were currently working in the country, he said the council had arranged for some, such as a group from India, to write the exam in India.

However, Mabuva conceded that no foreign nurses were exempt from writing the exam.

Mabuva added that the council was still in the process of negotiating the memorandum of understanding with AHP, but that its education committee that was dealing with the matter, only met once a quarter.

‘We had to show the MOU to our legal people and they made some changes which have gone back to the education committee.Once the committee has looked at those changes, they will have to forward the final MOU to the council for endorsement,’ said Mabuva.

In contrast to its failure to place foreign nurses, Kornik said it had been able to re-vitalise a number of rural hospitals by bringing in foreign doctors who did not mind working in outlying areas as they did not plan to stay longer than a year or two.

Once word got out that foreign doctors were in a particular hospital, South African doctors were more likely to work there because they knew they would have support, said Kornik. The word then spread to young doctors who needed to do their community service.

He said he had a number of examples of hospitals that had been turned around by AHP bringing in a ‘cadre of well-trained foreign doctors’.

Bethesda   Hospital in rural KwaZulu-Natal, for example, had never had more than three doctors by 2003. Thanks to AHP placements, there were currently 15 doctors at the hospital.

‘Addressing the skills shortage in our rural hospitals is a solvable problem if we use foreign health workers. Some 20 percent of Britain’s health workers are foreign. Rich countries have realised sooner than poor ones that this is a solution. Foreign health workers want to work in South Africa to get the experience, for humanitarian reasons and for the lifestyle,’ he said.