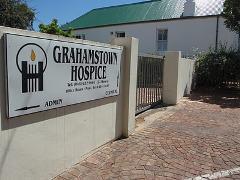 For many years, hospices were known as places where people are sent to die. But many patients, especially those with AIDS, come out alive.

Even though the Grahamstown Hospice looks after people who are literally on their death beds, there are a lucky few who, with the help of modern medicine combined with quality care, actually make it out of the hospice alive. Thirty-one year-old Sthembiso Jokani, who is HIV- positive, is one of the lucky few who were granted a second chance at life after he was admitted at the Grahamstown hospice without any hope that he would recover.

‘I also had cancer. I was unable to walk.   My legs were swollen and I had given up all hope’, says Sthembiso.

Before Sthembiso had cancer he had found out that he was HIV-positive when he was only 20 years of age in the year 2000. He was in denial for a couple of years and only looked for medical help when he was seriously ill in 2004.

‘In early January 2000, I went for a HIV test and I found out I was HIV-positive. It took me a whole year before I could accept my HIV status. My family also made life difficult as they were not supportive’, he says.

Sthembiso received help at the Grahamstown Hospice, where he was admitted for palliative care.   Palliative care focuses on the physical, spiritual and psycho-social care of patients and improves the quality of life of people with life-threatening illnesses.

‘I was on my death bed. I really believed that I was going to die. The hospice care workers gave me hope and kept on telling me that I would recover’, says Sthembiso.

The Grahamstown hospice helps patients who suffer from HIV & AIDS, cancer, TB and many other life-threatening diseases.

‘We help the patients and their families so that the family members may be able to take better care of their loved one’, says Ndumiso Mateyisi a counsellor at the Grahamstown hospice.

Ndumiso says most of their patients with terminal cancer, inevitably die. He says they offer patients not only medical help, but also psychological services, to help patients accept their deadly fate.

‘Death is not something that one can get used to. It is always sad to see a patient die, even though you knew it would happen sooner or later’, he says.

But some patients do get out of hospice alive. The advent of antiretrovirals has helped ensure that many people’s lives are prolonged. With the help of these medications, Sthembiso’s life was spared.

‘HIV-positive patients tend to recover when they receive the right medication at the right time’, says Ndumiso.

But Sthembiso was lucky to even get help. His destitute family abandoned him after he told them he had HIV. He then turned to his church where fellow congregant, Nokwandisi Jafta, decided to take him into her house and, then, ultimately to the Grahamstown hospice.

‘When he told me that he was HIV-positive, I told him to be strong and that I was there for him.   He comes from a very poor family’¦ so I asked him to stay with me, instead’, says Nokwandisi Jafta.

Nokwandisi says she had no fear looking after Sthembiso. But what really pains her is the stigma that people with HIV and AIDS face.

‘People should not treat HIV-positive people like animals. They are humans just like the rest of us. Everyone is HIV-positive until they go for a test to prove otherwise’, she says.

Happy to be alive, Sthembiso says he is grateful to the Grahamstown Hospice for their help.

‘It’s a miracle that I am still alive. So many other patients passed away. I would like to thank the hospice for their help’, says Sthembiso.