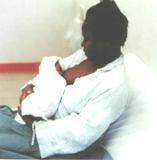 Formula feed for infants should only be handed out if prescribed by a medical doctor, health minister Dr Aaron Motsoaledi told a meeting on breastfeeding today (MONDAY).

He told delegates that South Africa was going through a ‘rough patch’ with child mortality increasing at a disturbing rate.

He said there were a number of interventions that needed to be taken to decrease child mortality, one being a review of the evidence on breastfeeding especially in the context of HIV.

Public health experts have for a long time warned that many gains at birth, including the prevention of HIV transmission from mother to child, were being reversed by the lack of a proper national policy on infant feeding.

‘There are very few medical conditions that make it necessary for formula feeding. Most if not all mothers can breastfeed. In the past all mothers breastfed their children, in fact this was the tradition. I don’t know what changed ‘ but by actively promoting formula feeding, manufacturers portrayed those that breastfed as not being worthy pretty much as those that sold skin whiteners to us did ‘ unless you had fair skin you were not a worthy human being.

‘I propose that infant formula should only be used when prescribed by a doctor,’ said Motsoaledi.

He said he did not wish to pre-empt the outcome of the meeting, but believed that the country needed to ‘reposition, promote, protect and support’ breastfeeding as a key child survival strategy.

Data from the Human Sciences Research Council national survey suggested that among infants 0 to 6 months, 25,7% were reported to be exclusively breastfed whilst 51,3% were mixed fed,   with solids and formula being   introduced far too early in life.

Breastfeeding has profound impact on child’s survival, health, nutrition and development with these benefits lost when formula feeding is given.

Motsoaledi said he had identified some barriers to breastfeeding incuding the ‘aggressive promotion’ by manufacturers or distributors of formula milk; practices in health facilities that are not supportive of breastfeeding and working mothers often stopping breastfeeding once they return to work.

Public health experts have for years called for a proper policy on breastfeeding in South Africa.

He said diarrhoea and pneumonia were the top two killers (as well as newborn problems) and that all of these causes were much higher in a non breast-fed population.

‘HIV has further undermined breastfeeding in this country. We find in our research that most infants (HIV positive and HIV negative) are being given formula from very early. Most HIV positive women  practice mixed feeding (77% by 12 weeks post partum) despite receiving free formula through the health service (except KwaZulu-Natal which has recently decided to phase out free formula).’

Sanders said this meant many children were dying unnecessarily from infections and that the HIV community had unwittingly contributed to this.

Dr Tanya Doherty, an expert researcher on Prevention of Mother to Child Transmission at the Medical Research Council, said in July that there had to be an unequivocal message that breastfeeding was best. ‘It is concerning that South African PMTCT guidelines still recommend the provision of free formula milk through public health facilities despite WHO recommendations that governments should promote a single feeding method that is likely to provide the greatest chance of child survival. In South Africa, this is breastfeeding,’ said Doherty.

‘The current lack of a clear message about breastfeeding could reverse the gains made in the PMTCT arena,’ she warned.

Current research is pointing towards the development of an effective microbicide in a few years time. However, experts believe it could have happened sooner if pharmaceutical companies invested more money in developing a microbicide which could prevent the transmission of diseases, more importantly HIV

The launch of an ARV drug factory in Uganda and Malawi’s attempts to double the number of people on ARVs by 2010 are some of the highlights in this issue of the Centers for Disease Control HIV/Hepatitis/STD/TB Prevention News Update.