Home » No shame in depression 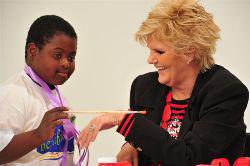 Depression can often be a lonely illness, but it doesn’t have to be, says South African musician PJ Powers. She spoke to Ayanda Mkhwanazi of Health-e News Service speaks about her road to recovery.

‘About six or eight years ago, I started to self-medicate by drinking alcohol purely because I didn’t know why I was feeling so down, so depressed, uneasy and uncomfortable in my own skin. Nothing excited me, which is one of the big signs with depression.

I went about my daily routine… pretty much felt like a robot. As I drank more, I got more depressed and, basically, I ended up in rehab with an alcohol problem’, says singer and song-writer, PJ Powers.

PJ realised about eight years ago that her excessive alcohol binges were a sign that she was not well. She says her biggest signal came as a form of a fear.

‘My big wake-up call was one day I was in the house and I needed to go grocery-shopping and I couldn’t make it out the front door. I just could not leave the house. I had made myself too vulnerable. I would sit down and watch TV and say, ‘after this programme I will get up and go to Pick ‘n Pay’.

The programme would end and I would get up, get my keys, walk to the door but couldn’t walk out. My lowest point was that I was paralysed with fear. I became so afraid to do anything, going to the shop and having people looking at me. I just became afraid of life’, says PJ.

It was at that moment that PJ Powers looked for help. She was diagnosed with depression about four years ago. Depression is a mental state of excessive sadness characterised by feelings of inadequacy. PJ has been on medication ever since. She says after she was diagnosed with the illness, she did not feel burdened or frightened by it. Instead, she says it was a relief.

‘The truth of the matter is that I would be lying to say I had this huge inside turmoil. I was so relieved to feel like I now understood what was wrong with me. Not to share that would have been completely selfish. I didn’t even think about it. I thought: ‘Wow! I am feeling fantastic.

Now who else can I tell?’ And if someone wants to stigmatise me, then that’s their problem. I always say what somebody thinks of me is not my business’.

PJ now lends her voice to creating awareness around mental illness. She features in an advertising campaign by the South African Federation for Mental Health (SAFMH) to raise the profile and awareness of the illness within communities.

Programme Manager at the SAFMH, Lindiwe Shayi, says by involving celebrities, they hope to break the stigma and show that mental illness has no boundaries.

‘Our goal is to ensure that mental health is out there and we want people to know about it. It is one of the issues that people are afraid to talk about or disclose and we hope that through PJ Powers’ disclosure, it will encourage others to come forward and also seek help.

People do not want to seek help due to the stigma attached to mental illness or intellectual disability’, she says.

Shayi adds that depression is one of the most common mental illnesses there is. She says depression can be triggered by a number of things. She shares some of the symptoms.

‘People have increased or loss of appetite that goes on for quite some time. Your sleeping patterns change they either sleep too little or too much. They tend to cry a lot, they suffer from pains, your whole body becomes numb, and they don’t have the courage to get up and don’t see meaning in anything.

Sometimes, you find there is a loss of hygiene – they don’t want to be clean. It’s an effort to do anything a loss of interest in their sexual life. They may also be suffering from euphoria either too happy or too sad’.

Shayi says support is vital for an individual suffering from any type of mental illness.

‘If you have a family member who suffers from a mental illness, it is important that you have lots of information about their condition, so they know and understand how to treat that person’, she says.