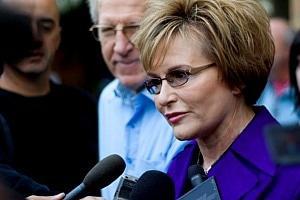 Last week Western Cape Premier Helen Zille made various comments suggesting that the provision of healthcare to those who behave ‘irresponsibly’ should be reconsidered. By Gavin Silber and Nathan Geffen.

Writing in her weekly newsletter, the Premier noted that over half of the Province’s budget is spent on ‘preventable illness’, while the ‘scraps’ are given to unpreventable conditions. This, she claimed, ‘has further widened the gap between ‘rights’ and their ‘essential corollary ‘ responsibility’. Specifically citing people who contract HIV through ‘irresponsible’ behavior she rhetorically questioned why ‘taxpayers must foot the bill without asking any politically incorrect questions ‘ enough already!’. She later tweeted that ‘if you duck responsibility, don’t come running to the state when you need treatment’.

A few days later ‘ at a provincial health summit ‘ the Premier went further to say that people who knowingly infect others with HIV should be charged with attempted murder.

The premier’s views are possibly popular across the political spectrum, but they are misinformed and unscientific. This debate is repeated periodically. Here are some rebuttals of the arguments the premier puts forward:

·               Judge Edwin Cameron has co-authored an in-depth explanation of why criminalisation of HIV is wrong.

·               Edwin Cameron and Nathan Geffen debated David Benatar on whether a person contracting HIV through his or her irresponsibility has a right to treatment.

This article first addresses arguments about why the Premier’s arguments on responsibility are wrong. We then deal with criminalisation. Finally we deal with the Premier’s concern that HIV treatment is taking resources away from unpreventable diseases.

(This is an expanded version of an article that was published in The Cape Argus on 15 November 2011.   Also published on Quackdown.info)

Silber is with the Social Justice Coalition. Geffen is with the Treatment Action Campaign.