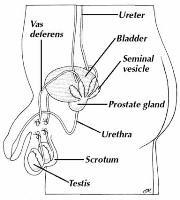 Most men believe that birth control is a woman’s responsibility and, to a certain extent, they are supported by women in that view. For instance, the majority of men will never have a vasectomy – the only birth control procedure for men. But why is that?

Vincent Zulu and Nomonde Buwa are a young couple who live in Johannesburg. They have been together for four years and would like to start a family together. Family planning is important to them for a number of reasons, including economic factors. But does Vincent think that he might ever consider having a vasectomy or male sterilisation should the couple feel that they have enough children?

‘I don’t think it’s a good idea. Circumstances can change. And, then, what will you do? I wouldn’t do it’, says Vincent.

Vincent’s partner, 24 year-old Nomonde Buwa, supports him in his view.

‘I’d rather take pills, not him doing it. These days we get divorced and he may find another woman. What will he do then?  So, I don’t think I would allow him to do that’, says Nomonde.

The couple believes vasectomy is too much of a gamble and that other forms of contraception would work better for them in the future.

According to Nomonde, ‘what you can do is use a condom or the woman must take contraceptive pills’.

‘I’m totally against it. There are some pills, and I think at a certain time you’ll stop making babies. If you get one more baby, then it’s fine, so long as you’re not sleeping around. It’s babies within the family.   That’s my opinion’, says Vincent.

Dr. Tersia Cruywagen, from the Reproductive Health Choices Clinic, in Midrand, says male sterilisation is an ideal choice for men who feel they have all the children they ever wanted, as it is considered a permanent form of contraception.

But Dr Cruywagen advised men to be 100 percent sure before doing a vasectomy, as chances of a reversal are very slim.

‘There is a reversal procedure that can be done. But the reversal procedure is complicated and the result cannot be guaranteed.  So, male sterilisation is for people who have completed their families and do not want to have any more children’.

She says the procedure is performed at a clinic or a doctor’s surgery using local anaesthetic and takes less than 30 minutes.

Dr Cruywagen says a vasectomy is the nearest thing to 100% effective contraception. She says it’s an option that may be taken by an older couple who are satisfied with the number of children they have.