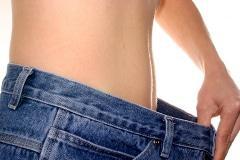 Looking your best and losing weight always seems to be a priority for the new year for many South Africans. But with so many weight loss plans around, choosing the correct and healthy weight loss programme is crucial.

Mother and daughter, Jabulile and Dikeledi Mawaune,  probably ate one or two many dishes of deliciously fatty food this past festive season. As a result,  they both struggle to fit into their regular jeans and this can only mean they’ve gained weight! The duo were not about to take this issue lightly.  They decided to get  onto a diet plan called  the Jump-start juice seven-day diet plan. For the entirety of the seven-day programme the dieters consume only fresh juices.

‘I lost in my first week’¦ I lost in a matter of three ‘ four days. I’ve now stopped because I’ve reached my goal of fitting into my jeans and it has also helped me decrease the amount of food that I take in’, says 22 year old Dikeledi Mawaune who struggled to fit into her size 30 jeans.

This was the first time Dikeledi got into a weight-loss  programme. Her  47 year-old mother, Jabulile Mawaune,  however,  has had previous experiences with dieting.

‘I did Bio-slim early on,  but it only worked temporarily.  I had some side-effects,  which were mainly constipation.  And I think it reduced my glucose levels because I was shivering and forever hungry on it. I had to abandon  Bio-slim’, says Jabulile.

However,  even with her previous unpleasant experience with dieting pills, she jumped at the opportunity to start on this juice diet,  also referred to as a detox diet plan.

‘The diet has really worked because I can fit into my clothes,  although I didn’t measure my weight before I started.  But I could gauge with the clothes that I’m fitting in that I was not fitting  in before’, says Jabulile.

Though  the mother-daughter pair  have nothing but praise for their seven-day juice diet, Lila Bruk,  a dietician at the Wanderers Wellness Centre, says it’s unlikely that such a diet will provide long-term results.

‘I think that one needs to realise that there is no such a thing such as a ‘quick fix’. Whether it’s the case that someone is trying pills, shakes or crash diets,  at the end of the day it’s not going to work’, she says.

Bruk says the Mawuanes will probably regain the weight and may very well have negative side-effects like constipation.

‘There is no point to the juice diet because what ends up happening is that you stick to your juice every day,  but after that if you go back to your old habits. The weight which you would lose, you put back on’’, she says.

‘The dangers are that it puts your body under a lot of strain.    Look at the weight loss that the plan promises. A  healthy weight loss is half to one kilo a week. So,  if it says three kilos per week,  then,  that’s going to be too much of a weight loss.  It’s potentially dangerous and, probably,  an unhealthy way of losing weight’, says Bruk.

She also warned people to research and find out about the side-effects of a weight loss plan before they get into it.

‘If you are taking pills or shakes or other potions that cause you to lose weight, then those products themselves may have dangerous side-effects such as increasing the risk of stroke, heart attack, and it can also have other negative side-effects like insomnia and palpitations’, says Bruk.

So,  what healthy eating plan can people use then?

‘Firstly,  one needs to make sure that one is choosing the lowest fat products.  So,  an easy thing to do is to change from full cream dairy to low fat or,  preferably,  fat-free, then,  to do things like removing skin from a chicken, cutting fat off meat and,  obviously,  avoid all the junk foods…  Making sure that each meal is balanced… For example,  at lunch and dinner you should make sure that half your plate is vegetables, a quarter of your plate is protein and another quarter is starch’, she says.

She adds that regular exercise and drinking between six to eight glasses of water everyday also helps.

‘Don’t just do something as a quick fix. Make sure whatever you’re  doing you can sustain for the next week, month, year! It needs to be something that will last’, concludes Bruk.