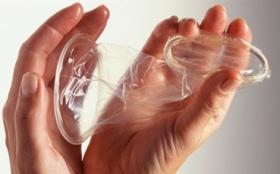 Female condoms were introduced over a decade ago, but they still remain a taboo subject with many South Africans.

The female condom, also known as the femidom, provides women with a condom of their own to use for protection against unplanned pregnancies and sexually transmitted diseases, such as HIV and AIDS.   However, negative perceptions from the product’s intended users and a perceived low demand for female condoms have considerably slowed its distribution and accessibility.   Twenty-six year-old Lindiwe Zulu from Soweto, shares her experience using the female condom.

‘I’ve tried them once and they were not very comfortable. So, I stopped using them then and there.   They have these two huge rings that are very scary’¦ I can’t insert that inside of me. Even my boyfriend didn’t like them. So, we use the male condoms’, says Lindiwe Zulu.

Though she had a bad first experience using the femidom, Lindiwe says she would like to give it another try.

‘I think, maybe, the problem was that I didn’t know how to use it properly. So, if I get a chance to learn more about them, then I’ll try it again’, she says.

‘I have never used a female condom with my girlfriend. It’s nasty! Gosh! The size of it… It’s too big. I don’t think it will fit in the vagina’, says William Mhlanga.

Twenty-four year-old Nomonde Bua from Soweto admits that she’s never tried to use the female condom, though she’s known about it since her high-school days.

‘Firstly, that thing is huge. I never tried using it because I don’t think it’s that comfortable. It’s such a turn-off. I don’t even know how it’s put on. I don’t think it will work for me. I prefer the male condom’, says Nomonde Bua.

However, she does realise the importance of the female condom as the only female-initiated protective method and that it has the potential to give women the power to practice safer sex.

‘I think these condoms [femidoms] will help us as women if they could be introduced to us properly because, sometimes, amadoda [men] don’t want condoms. They will tell you stories, that: ‘I forgot to put on a condom’ or ‘no I didn’t get a chance to buy a condom’. But, if you have your condom, you can say: ‘Okay, here is my condom, let’s use mine’,’ she says.

Tian Johnson, a Strategist for the African Alliance for HIV Prevention, says there are a lot of misconceptions around femidoms.

‘There is the incorrect perception that there is no demand for the product. And the argument has always been that: How do you demonstrate demand in the absence of product? We still have some areas in this country where women have never seen female condoms’, says Tian Johnson.

Johnson also rubbished the arguments that femidoms are noisy and uncomfortable during sex.

‘Who has silent sex?   Why are we using the noise of a female condom during sex as a basis to deprive women and men of another tool to prevent HIV? On the issue of discomfort, we have a lot of research that proves that the more you use it, the more comfortable it becomes’, says Tian Johnson.

Currently, 5 million female condoms have been distributed across provinces. But, Johnson says although it’s difficult to gauge the actual demand for female condoms, this number is not nearly enough.

‘We have 5 million that have been distributed. But if no more are procured, we foresee a shortage where there will be no stock in provinces’, says Tian Johnson.

Jeanette Hunter, the Chief Executive Officer of the Health Systems Trust, says there needs to be research into the advantages and disadvantages of the use of the female condom.

‘We need to do some form of research to find out: Is there consensus around the fact that it’s uncomfortable and not conducive to pleasant sexual intercourse? Or are there women who are using it and can actually be advocates for it? I think to just go out on a drive that ignores what may be bonafide complaints against the female condom would not be wise’, says Hunter.