Thousands more people from disadvantaged backgrounds will benefit from the second Phelophepa train, which reaches into communities where health care is hard to access.

Millions of people from rural and impoverished areas have benefited from the Phelophepa train, fondly known as the miracle railway clinic. The second Phelophepa train was unveiled in Mdatsane, one of the poor settlements in the Eastern Cape. The two trains will work simultaneously to provide primary health care. The train remains stationary at one location for a period of two weeks before it moves to another destination.

On board there is an eye and dental clinic, pharmacy, psychology and edu clinic, amongst other services. Hundreds of Mdantsane residents flocked to the mobile clinic on the day of its opening. Public Enterprise Minister, Malusi Gigaba, took time to explain to the residents who seemed upset that they had not yet been attended to, why health workers take so much time with one patient.

‘When they give you the medicine they have to thoroughly explain to you how it should be used. You find that when the doctors give you the medicine some of you may not be able to read, so you don’t understand how to use the medicine given to you. Please give our doctors time to explain how to drink the medication. Do not be impatient with them because the next thing you are going to accuse them of not healing you. So, it is important for them to take the time to explain to you’, says Gigaba.

Pensioners Ruth Jacobs and Balise Lali, are among those who arrived as early as four in the morning. They say they are happy with the excellent and professional service they received.

‘Those who came for prescriptions in the pharmacy have already been assisted. Their service is good. They are really working hard’, says Jacobs.

‘Their service is excellent, really excellent! We would like it if they could stay longer in an area, maybe a month, because a lot of people need help. These health workers are working hard and they are quick. But, we are praying to God to help them in future to stay for one month, not two weeks, because we need them’, Lali adds.

The Phelophepa train usually travels from province to province starting in January to September, staying for a period of about two weeks at a location. The health workers on the train see more than 1000 patients per week. Phelophepa project manager, Lynette Coetzee, says one of the common health challenges in these poor areas include lack of access to medication.

‘It is so sad to see the patients’ card and how their clinic would write week after week, ‘no medication’. They wait very long for their medication. The other problem is people coming to the train for cancer screening; they are simply unaware that they have cancer. In the beginning, men were reluctant to come for screening but that has now improved. We refer our patients to clinics in most cases because the train is not a permanent structure. We’re just helping and doing what we can’, says Coetzee.

Zingisa Jaftha is a retired health worker and a nurse on board the Phelophepa train. She says in some instances people are not aware that they need urgent medical attention.

‘My main concern when I’m doing my job is that many people are not aware that they have diabetes or high blood pressure when I test them. When I inform them they always deny it and are usually shocked themselves. I will then give them a solution to use to help stabilise their blood pressure and then refer them to their clinic to get more help as soon as possible or they might get sick or even faint’.

Furthermore, the train is a training ground for medical students with 40 students spread out in the different departments. Most of the students return to work as permanent staff on the Phelophepa once they qualify.

Phelophepa manager, Onke Mazibuko, says they notice that everywhere the train goes, the numbers double. He says people normally camp and sleep outside the train the night before. Mazibuko says the train is also popular for the attitude that staff and trainees have towards patients.

‘I always tell the students during orientation that we acknowledge their academic background, but what matters here is the attitude more than anything. If you can’t treat the next person with dignity or respect, then you are going to struggle here because we have people from different backgrounds. Those issues are always discussed right at the beginning’, says Mazibuko.

After Mdantsane, Phelophepa’s next stop is Dimbaza in the Eastern Cape.

TSHWANE. – Phedisong 4 Clinic in Ga-rankuwa was abuzz with when the Minister of Health, Dr Aaron Motsoaledi, recently introduce the roll-out of the new one-a-day antiretroviral treatment for HIV patients. 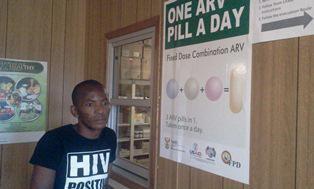 It was a hard, cold winter in the North West where hospitals reported everything from pillows to hot water was in short supply. The province’s financial crisis has left some patients out in the cold as moratoriums on everything from hospital maintenance to new appointments stretch the health system thin.

Despite spending slightly more than the national average on health per person, a number of KwaZulu-Natal’s key health indicators are getting worse.