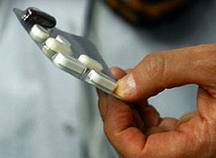 DURBAN ‘ Cases of drug-resistant tuberculosis will continue to increase unless scientists develop more effective medicines with fewer side effects.

This has emerged as one of the key issues at the third South African tuberculosis conference, which opened last night (Tues) in Durban.

At present, people with drug-resistant TB face almost two years’ of treatment, including a daily injection for the first six months.

Despite this punishing regimen, less than half the cases of drug-resistant TB were cured in South Africa last year, according to the World Health Organisation. A number of patients also stop treatment because they cannot tolerate the side effects.

‘Treatment for drug-resistant TB is ineffective. It is too long, there are significant side-effects and it is expensive,’ according to Dr Helen Cox of Medicins sans Frontieres.

‘Aside from the daily injections that are very painful, 30 percent of people with drug-resistant TB develop hearing loss that is irreversible as a side-effect of the drugs,’ said Cox.

‘If someone starts going deaf a few weeks into treatment, what do we do? They need to continue with their treatment, but this means they will either be deaf or dead. This highlights the urgent need for new drugs.’

The Treatment Action Campaign, Section27 and Oxfam, called for patients with drug-resistant TB who were failing to respond to treatment to be given ‘access to the best available medicines’.

The organisations argued for such patients to get compassionate access to new, promising medicines not yet approved by the Medicines Control Council, including Linezolid, Bedaquiline and Delaminid.

The organisation delivered a memorandum containing five demands to conference organisers shortly before the opening.

Other demands include the diagnosis of all people living with TB and the decentralisation of care for people with drug-resistant TB, enabling them to be treated at home instead of hospitalised for long periods.

Health Minister Aaron Motsoaledi was due to open the conference but had to withdraw at the last minute to attend ‘urgent business’, possibly linked to the Cabinet reshuffle.

Meanwhile, speaker Professor Valerie Mizrahi from the University of Cape Town, said the world was in an exciting ‘new era of TB drug discovery’, but that overcoming TB was formidable as the bacteria had the ability to ‘persist’ in the face of treatment.

Bringing a personal touch to the opening ceremony, Dr Ausi Nkhi told the 1 700 delegates how she had contracted TB of the uterus as a medical student. As a result, she had been unable to fall pregnant and had endured four ectopic pregnancies.

Nkhi warned that healthworkers faced significant more risk of getting TB than the general population.

‘I am living with the aftermath of TB and I wish that no one should go through suffering and death as a result of this disease,’ said Nkhi.