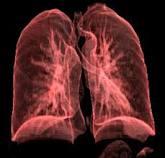 It is well-known that secondhand smoke increases the risk of heart disease and lung cancer, but research now found that people exposed to secondhand smoke are more likely to die of stroke or emphysema than those who were not exposed.

The research by Dr Yao He of Chinese PLA General Hospital in Beijing and colleagues was published in the journal, Chest.

Although the researchers were unable to prove a definite link between secondhand smoke and stroke and emphysema, they followed people over many years and found evidence of dose-response relationship, which is key to building the case for a cause-and-effect relationship.

The findings are based on 910 adults who were followed over 17 years. At the start, 44 percent said they lived with a smoker, while 53 percent said they inhaled secondhand smoke at work. Over the following years, 249 study participants died, and the risk of death from heart disease, stroke, lung cancer and emphysema was two to three times higher among people exposed to secondhand smoke.

The number of people who died of each specific cause was fairly small, which is a limitation.

In South Africa, new regulations are being put in place that will reduce the level of secondhand smoke exposure in non-smokers. If approved, new amendments to the Tobacco Control Products will prohibit smokers from smoking on beaches, in outdoor eating areas or at sports or other public events.