Infection with the human papillomavirus (HPV) ‘ which is the most common cause of cervical cancer ‘ also increases a person’s risk for contracting HIV.

This is according to a systematic review and meta-analysis recently published in the journal AIDS, which reinforces the outcome of several other studies that have pointed to a link between the two infections.

What makes this link particularly relevant is that there are vaccines available to prevent infection with some types of HPV, said Dr Catherine Houlihan from the London School of Hygiene and Tropical Medicine in the UK.

For their research, Houlihan and team reviewed and combined data from eight published studies, along with other unpublished data from five of the authors. They analysed the findings in three separate groups; women, heterosexual men, and men who have sex with men.

Seven of the studies found an association between prevalent HPV and HIV acquisition.

“In the two studies in men, a similar increase in the risk of acquiring HIV was seen,” Houlihan said, “(but) the associations with vaccine types were not consistent.”

According to the researchers, between 21 and 37 percent of HIV infections in the population studied could be attributed to HPV.

“The studies in women,” Houlihan said in a Reuters Health report, “suggest with reasonable consistency that, in populations with high incidence of HIV, being infected with HPV may increase the risk of becoming HIV positive. However, there are over 40 genotypes of HPV that infect the human genital tract, and current HPV vaccines only directly cover four of those genotypes. There are currently insufficient data on associations with vaccine types to allow reliable estimates of the potential impact of HPV vaccination on HIV incidence.”

Houlihan emphasised that current vaccines “are important in the prevention of cervical cancer and should continue to be promoted as such. More evidence is needed to evaluate their potential role in modifying HIV risk.”

Smokers are more likely to develop oral health problems such as mouth cancers, gum disease and cavities, according to new research by the US Centres of Disease Control and Prevention (CDC).

Thousands of children develop cancer in South Africa every year, but scarce facilities and delayed diagnosis mean the odds are stacked against many.

Tobacco experts recently voiced their concern about the rising prevalence of smoking in the developing world, especially Latin America, which puts these populations at risk of being overwhelmed by a burgeoning cancer epidemic. 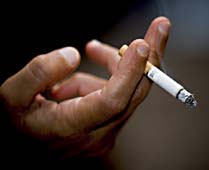