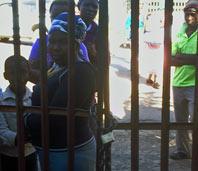 Story by Mtshana Mvlisi, an OurHealth Citizen Journalist based in the OR Tambo District in the Eastern Cape.

LUSIKISIKI – Patients were greeted with locked doors at the local clinic on Monday. Unconfirmed reports indicate that the clinic was closed after the Eastern Cape Department of Health (DoH) failed to pay the rent.

This was the excuse given by Mrs Ntlangulela and Mrs Myolwa from the District office to an angry crowd of people queuing in front of the clinic for treatment. According to them, payment issues with the rent have been ongoing since 2010, until finally the landlord, TEBA (a recruitment organisation), decided to lock the premises.

After discussions between TEBA and the District DoH, the clinic doors were reopened for another two weeks while they await instructions from the Provincial DoH.

If the Provincial DoH don’t respond within two weeks, the clinic will be forced to close and patients will be left without healthcare as health services at neighbouring clinics are already overstretched due to a lack of health care workers.

A major hurdle in the path towards the implementation of a national HIV and AIDS Care and Treatment Plan has been cleared. At a parliamentary briefing on Monday, the Minister of Health, Dr Manto Tshabalala-Msimang, announced that tenders for drug procurement in preparation for the roll-out of the Plan are to be advertised this Friday, (13/02/04).

The launch of the Joint Public Health Enhancement Fund last week is a rare occurrence in the history of South Africa’s health care. The Fund illustrates that in a climate of tough economic times and international donor fatigue, local private sector funds are sorely needed if South Africa is to improve its health outcomes.