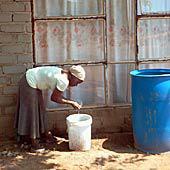 OURHEALTH. – Villagers from Matavhela and Mufulwi villages in the Vhembe district in Limpopo say they are fed up with having to use rain water because there is no water coming out of their taps.

The villagers  have been without  proper clean water for about two months. “We have no choice but to use this water from the rain because, other than this [rain] water, we have no other water,” said 48-year-old Elisa Masithi from one of the villages.

When rain is scarce, the community is forced to fetch water from the nearby river  where  people also  wash their clothes. “The water we use from the river when we have no water in our taps is not clean and that is very bad for our health because the water have germs,” said Mulalo Netshitandani from Mufulwi village.

Villagers say they have made attempts to get an explanation from the councillor who has turned a blind eye to their concerns. Both the ward councillor and the municipality refused to comment on the water issue when OurHealth questioned them about it.

“She [the councillor] keeps on promising that we will get water soon, but there has not been any change,” said a 35-year-old man who preferred to remain anonymous. “While we are using this rain water, she is getting clean water from the municipality, and when we ask why we are not getting it, she would tell us that she is paying for it,” he added.

Staff at the Matavhela Clinic confirmed that more patients have been presenting with diarrhoea, pneumonia and cholera since the water issue began.

“We are advising the villagers to boil the water before they use it, because that kills germs,” said Elisa Netshivhongweni, a nurse from Matavhela clinic.