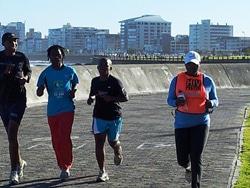 A tiny trickle of sweat dribbles across her forehead, her braids bouncing and glistening in the early morning sun, her gaze fixed, the earphones firmly in her ears. It’s hard not to notice Vuyiseka Dubula as she strides along the Sea Point promenade in her bright orange bib, ‘HIV Positive’ proclaimed in huge, fat black letters across her chest.

Next to her fellow orange-bibbed runner Tantaswa Ndlelana, the tall and lanky Thanduxolo Mngqawa, her younger brother Mahlubi Dubula and the dreadlocked Messi Qhaba glide along the Atlantic seaboard, laughing, chatting and singing as they go.

However, this is no social outing, they are part of a growing group of runners and walkers affiliated to the Treatment Action Campaign who have a number of ultra-marathons under their belt, including the big one ‘ Comrades.

For many years people living with HIV/AIDS (PWA) have been considered ill and not as athletes, however, this group if smashing this stereotypical and incorrect view.

Most of the members of Runners/Walkers for Health were never runners, they believed that it is not something PWAs should consider tackling.

Dubula, an internationally recognized activist and Secretary General of the TAC, recalls the start of it all two years ago: ‘I was very stressed and I needed a distraction.’

She laughs as she adds that it had also been part of a plan to challenge fellow activist and head of SECTION27 Mark Heywood, a Comrades veteran.

‘He always used to brag about running Comrades and he is older than us, so it gave us even more of a reason to get going.

Dubula believes the initiative has brought members together. One of the rituals is for everyone to go for a run in Muizenberg when they gather for national meetings. ‘We sing a lot and then we don’t feel the pain. There is also always something to talk about, whether it be TAC business or sport. All the men talk about wanting to look like Bolt and the women want to look like Serena,’ laughs Dubula.

Last year a number of them completed their first Comrades Marathon.

Dubula adds that one of their main goals is to encourage fellow PWAs to join, one of the reasons they always run in the HIV positive bibs. ‘We could really see we made a big impact at Comrades. Many people wanted to run with us because we are always laughing and singing, we are always having fun and we carry those who are struggling. People came to us along the way and exclaim ‘Yhu! You have HIV!’. They cannot believe it, they did not think it was possible.’

‘Everyone runs their own race. Running has taught me to pace myself at work and after Comrades you really feel there is nothing you cannot conquer. You feel you can do anything.’

Dubula, who is continuously trying to find running shoes as new members joining, hopes that they can find someone to train them properly. ‘We are worried that we are going to pick up injuries, we really have no training programme.’

For now, the bibbed runners are covering the length and breadth of South Africa, with groups starting up in Johannesburg, the Eastern Cape and Pietermaritzburg. ‘The Facebook page has more friends that the TAC group,’ she quips.

‘It is about more than exercise. It’s how we connect. It challenges us and encourages us at the same time,’ adds Dubula.

Cape Town and Johannesburg runners wishing to donate their old running shoes can contact the group via Facebook. World AIDS Day is on Saturday.