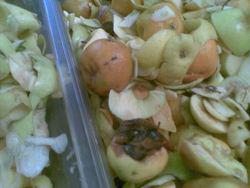 Speaking on condition of anonymity, one CHB kitchen staff member recounts how patients in the maternity ward were recently served pap cooked from maize meal that was infested with worms.

‘There were worms and weasels found in the 50kg of mielie meal in the maternity kitchen, and it was reported to the chief food services manager. She then gave instructions to the supervisors to go and buy a sieve at the Bara mall and to sieve the mielie meal.

‘And they had to serve that pap to the patients,’ the staff member said.

Other kitchen staff speaking to Health-e also claimed that patients have been fed left-over or rotten food from a fridge, where food collected by pig farmers is stored.

Another anonymous employee said in one instance they were instructed to use fruit that has been placed in the pigswill (fridge).

‘The bananas were rotten and had been discarded in the pigswill (fridge). The chief manager instructed a supervisor to use it for the patients and make banana bread.

‘Another case was the apples.There was a problem with the temperature of the fridge, so everything rotted. She said they should peel them and get the bits and pieces where it is still okay and cook it for the patients. That was served to all 17 paediatric wards – that’s about 300 children’ the source said.

The staff member also claimed that meat fat was stored and used as cooking oil when preparing food, even for vegetarians.

‘The chief food services manager instructed the cooks to keep it (the fat) in the fridge to use it as a replacement for oil,’ she said.

It is understood that such practices are not in line with the dietary guidelines of the hospital.

‘We are supposed to promote a prudent diet. If the dieticians can realise that pure white fat and drippings from the meat is being used in all the food, they would not accept that,’ said the staff members.

Sources also confirmed that dietary guidelines are ignored and vegetables are not served to patients.

A hospital spokesperson refused to comment while the Gauteng Health Department spokesperson Simon Zwane failed to reply to pertinent questions. He claimed that all the correct procedures were followed in the preparation of food, but alluded to the fact that they faced budgetary constraints.

A dietician working at CHB confirmed that they had been facing ongoing problems since 2009. She said that dieticians had raised their concerns a number of times with management, but nothing had been done.

She claimed that the hospital had said the reason why patients were served poor food was because there was insufficient food to go around, due to suppliers not being paid.

She agreed that the running of the hospital kitchens was sub-standard.

A Lenasia patient who stayed at CHB for more than five months said patients were severely under-fed and malnourished.

‘When it comes to lunch, you will be lucky if you get two slices of brown bread. They don’t care if you are a diabetic or Muslim.

Even when you request a halaal diet, you open your eyes, you’re all eating the same. There is never fruit, they will give you tea with one spoon of sugar… everything they supply us with, they cut the quantity. If they see your family comes regularly, they skip you,’ said the patient.

The patient said staff told her that they were receiving less than half of their food supplies, necessitating the ratitioning.

‘They will give you samp today and tomorrow for lunch or even the whole week,’ she added.

Another Lenasia patient, indentifying herself as Aunty Hajirah, was admitted to CHB for three months. She says the food was appalling.

‘People used to complain about the food, especially because we don’t eat the same portions. A lot of people died when I was there because of under nourishment. You can’t give adults food like you give babies… very small portions. I was there for three months and I never got a juice, fruit or dessert. It was very bad. I always used to share my food with other patients,’ she said.

A herd of goats has helped to improve the health of children at Vhutshilo Mountain School in Tshikombani village in Vhembe.

Israeli doctors will be traveling to Swaziland for two week stints to assist in a mass circumcision campaign in the hope of curbing the spread of HIV. This and other stories are contained in the latest Centers for Disease Control HIV, Hepatitis, STD and TB Prevention newsletter.

Although the HIV prevalence rate for pregnant women has been virtually the same over the past four years at 29.2%, this was still a ‘high and unacceptable’ level.