Home » Mentor mothers show moms how to do it 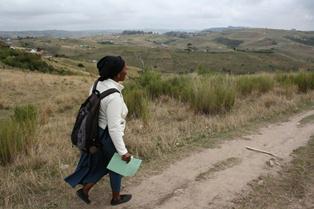 A non-governmental organisation, which focuses on the well-being of pregnant women and their children is showing the way on how to re-engineer South Africa’s primary healthcare system in both urban and rural settings.

The toddler bolts towards the hut the moment he spots Funeka Xhalisa.   Walking at a steady pace down the hill towards the toddler’s homestead halfway down a hill, Xhalisa cracks a broad smile when she spots the little one.

The toddler’s chubby legs almost struggle to keep up with his enthusiasm to reach the hut and he screams past the dogs lazing by the door, bellies turned to the afternoon sun.

His high-pitched, excited yelling alerts the women in the hut to Xhalisa’s approach and they turn to greet her as she enters the door, offering her the only semblance of a seat, a wonky wooden bench against the wall.

Xhalisa rummages through her rucksack and produces a scale, gingerly placing it on the mud floor.

In the time it takes Xhalisa to prepare, the toddler, has flung off his tattered clothing and waits naked and impatient for the women to stop chattering.

He hops onto the scale and proudly looks up at Xhalisa who bends over to read the weight, earnestly recording it on a chart. When finished, she smiles and pats him on the head. The women clap enthusiastically and help him to get dressed while another toddler is weighed.

With policymakers and researchers scratching their heads to find ways to transform South Africa’s ailing primary healthcare system, the Philani Maternal, Child Heath & Nutrition Project, of which Xhalisa and other women are a vital cog, is slowly but surely revolutionizing the health outcomes of mothers and infants in a small corner of the the OR Tambo district, in rural Eastern Cape and urban Cape Town including Khayelitsha. Philani is having a major impact on health outcomes for both the women and their children.

In essence, Philani hits at the heart of some of the South Africa’s biggest and most challenging health problems   – which affect the health of mothers and children – HIV, TB, unsafe delivery and poor birth outcomes, Foetal Alcohol Syndrome and high rates of infant malnutrition and stunting.

Philani’s core intervention is to recruit mothers from their communities like Xhalisa, who have managed to raise healthy children despite their circumstances,  as Mentor Mothers.

The Mentor Mothers visit mothers-to-be in their homes and continue to visit them years after giving birth, firstly ensuring that the pregnant mother has a healthy and safe birth and then ensuring that the baby grows and thrives. These visits continue until the baby is six years old. The Mentor Mothers are also continuously trained on how to handle the various challenges they are confronted with.

The Mentor Mothers literally walk from house to house, and in the Eastern Cape this translates into hiking up demanding hills and navigating poor transport links, to identify and support pregnant mothers and malnourished children.

The task list is long, but critical. Among others, all infants below six years in the household are weighed, their growth monitored on the growth charts, clinic cards are checked to see if they have received their immunisations, exclusive breastfeeding is supported, nutrition is discussed with tips on how to make healthy, affordable meals and clinic referrals are completed.

A novel approach has been to incorporate Early Childhood Development

into home-based support from the mentor mothers.

The pregnant mothers receive HIV counseling and discussions take place on accessing grants, and so on. An important element has been the promotion of exclusive breastfeeding, an intervention which has been established with great success by Philani.

In the Eastern Cape, the Mentor Mothers promote delivery at the hospital as distances are vast and often involve long trips on rocky roads, a risky situation if the mother is already in labour.

In an attempt to make it easier, Zithulele Hospital has erected three huts where waiting mothers are accommodated.

‘If they identify a severely malnourished infant, the Mentor Mothers will continue to visit that household on a daily or weekly basis, depending on the severity of the situation,’ explains Sarah Gouws, who manages the Eastern Cape project.

Philani started in Zithulele, near Mqanduli in the Eastern Cape over two years ago and has now expanded to nearby Coffee Bay. In total, 44 Mentor Mothers are working in the  OR Tambo District and they average well over 3 000 visits every month to 1 ,200 households.

Here, the vast majority of households are impoverished with the families relying on government grants to survive. Philani has also taken on an active role in assisting families to apply for social grants, which would often also involve applying for identity documents and birth certificates, but also involves long and expensive trips to Home Affairs offices. Philani has managed to secure some co-operation from Home Affairs in several cases.

In a relatively short time, anecdotal evidence is showing that the impact is significant with reports from Zithulele Hospital doctors indicating that they have seen a decrease in malnourished children. At the clinics, pregnant mothers are also reporting much earlier for antenatal care.

The Eastern Cape chapter of Philani has also managed to cultivate relationships with the traditional leaders in the areas they work. They form a vital part of the programmed, supporting the Philani workers in solving social problems, educating their peers on health problems in their communities and empowering them to improve the health in their own communities.

Senior Philani staff have regular meeting with the chiefs and headmen.

Hundreds of thousands of kilometres to the west of the Zithulele, the Cape Town leg has been running since 2000 and 120 Mentor Mothers reach out to 4 000 families every year.

Nokwanele Mbewu, Senior Programme Manager for the Outreach programme,  believes the strength of Philani lies in the fact that it reaches people in their homes as opposed to health institutions.

‘We acknowledge the Mentor Mother’s coping skills and we strengthen these mechanisms and encourage them to go back to their communities and share what they have learnt,’ she explains.

Mbewu adds that the programme is not only about nutrition, but also about ensuring that the children grow cognitively. This means the mothers are encouraged to engage with their babies while still in the womb and once they are born.

She believes that Mentor Mothers set themselves apart from Community Health Workers because they focus on the entire household as opposed to a single health problem.

‘We deal with all problems and while we may not be able to solve them all, we can offer the family support in its attempt to find solutions. We are not educators, but listeners,’ she underlines, adding that they have very good working relationships with critical partners in government, including clinics, hospitals and social services.

Mbewu believes their success can also be ascribed to the fact that they earn the trust of mothers who are then more likely to recommend and refer other mothers.

Philani was founded more than 30 years ago by Dr Ingrid le Roux and community members who believeds that nutrition and health are the starting points if every child in this country is to develop its full potential.

‘A child that is malnourished and sick is not going to be educated. So we felt nutrition should be the basis,’ explains Le Roux.

‘We aim to help mothers to help themselves. By working with mothers, educating them in the basics of nutrition and health, providing them with skills training and giving them an opportunity to earn a living they ensure not only the health and wellbeing of their children and themselves, but of their community,’ says Philani.