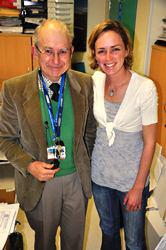 A drug offering a last resort for many patients with extensively drug resistant tuberculosis (DR-TB) remains unavailable to desperately ill South Africans as the country’s drug regulatory body continues to delay compassionate access. Health-e News Service tells the story of two young South Africans, one who managed to beat the system and accessBedaquiline, the other coming up against a brick wall and fast running out of options to save her life. By Anso Thom, Health-e News Service

Two young women ‘ one a former hospitality student and now unemployed, the other a qualified medical doctor.One from a middle-class family in Cape Town, the other from a poor family in Khayelitsha. Worlds apart, but their life stories have one thing in common ‘ drug resistant tuberculosis (DR-TB).

Sadly, fate has dealt a cruel hand to the one and fortunately, a lifesaving break to the other.

Olwethu Sdawo (19) has the widest, most beautiful smile. However, it is hard to ignore her frail body and eyes that seem weary, but still with a glimmer of hope.

Unemployed and financially dependent on a government grant, Olwethu lives in Khayelitsha with her mom and two sisters.

The young HIV-negative woman was studying hospitality when she received the devastating diagnosis. She has since given up on her studies as she is simply too unwell to work.

Diagnosed with TB of the lungs in November 2011, she immediately started regular TB treatment, but after two months it was clear that she was not responding to the drugs.

She continued to lose weight and the TB symptoms persisted. A repeat sputum test confirmed that Olwethu had multi-drug resistant TB (MDR-TB) and probably had it from the start (most DR-TB in South Africa is transmitted and it is possible to be infected with a drug resistant strain even without a prior history of TB).

In January this year Olwethu was admitted to the sub-acute inpatient TB facility in Khayelitsha and placed on a standard five drug regimen, which included the painful intramuscular injectable drug, Kanamycin, which has to be taken for at least six months.

Despite continuing treatment for the disease, she was still admitted to hospital several times with acute illness episodes and was diagnosed further with TB of the abdomen and other chest infections. Further confirmation of the tests done in December last year confirmed that she actually had more extensive resistance to other DR-TB drugs than was originally thought, and she was diagnosed with pre-extensively drug resistant (XDR) TB in February of this year. Despite her treatment being changed to the standard treatment regimen recommended for XDR TB in South Africa, almost 9 months later she remains very ill and weighs only 34 kg.

Olwethu’s doctor Jennifer Hughes is full of praise for her patient: ‘She has remained compliant on her treatment all along despite horrid side-effects such as persistent nausea and the painful injections.’

Olwethu appeared to be doing well at the beginning of this year, responding to the treatment and even gaining weight. However, in August her sputum again returned positive.

Despite Hughes managing to secure two further drugs to add to the arsenal, Olwethu’s chances of cure have plummeted.

Hughes believes that had Olwethu had access to a better drug regimen from the start at the time of her XDR TB diagnosis, she could have been cured. Even if any new drugs do become available at this stage, it may be too late for Olwethu, as one new drug cannot be used in isolation to treat DR-TB.

Almost in another world, far removed from Olwethu’s, Dr Dalene von Delft stares into the distance as she recalls her own DR-TB journey, which ended on a positive note, but also only after much pain and desperation.

Von Delft has no way to know for sure where she was infected, but she recalls developing a chronic dry cough while working in a government paediatric ward.

‘I had seen a lot of TB by then, so there is no way to know where I got it,’ recalls the blonde Capetonian.

A colleague encouraged Von Delft to have the cough checked out and a chest x-ray confirmed TB in the lungs.

‘I wanted to make sure it was not a drug resistant strain although I was told I should start normal TB treatment and see how I respond. I wanted to be sure.’

Further tests confirmed that she had a drug resistant strain and before she knew what had hit her Von Delft was in isolation, first in the private hospital where she was being treated and later at home.

Von Delft pulls her face when she recalls the side-effects from the treatment. ‘It was horrible, you are constantly nauseous and then you have to take (20-30) pills that in themselves constitute an entire meal. I literally had to sometimes swallow my own vomit in a desperate effort to keep the drugs down.’

When Von Delft started losing her hearing (a side-effect from one of the drugs), doctor colleagues encouraged her to try and access Bedaquiline which was only available to patients participating in trials at a Cape Town hospital.

Von Delft called on every conceivable contact she could lay her hands on and with a supportive letter from the doctor running the trials, Von Delft managed to receive the go-ahead during a tiny window period when the Medicines Control Council allowed Section21 access, before again denying this access.

‘I really wanted that drug. I knew this was my life and I would have to fight for it,’ she recalls.

Two years later Von Delft was cured, but she is clear that the journey has changed her. ‘It is a terrible disease. I used to see patients suffering from this disease, but now when I look at them it is different. I realize how tough it is.’

Von Delft’s experience has also moulded her into a passionate activist, and she now uses every opportunity to encourage health workers and students to comply with infection control measures.

‘Health staff are exposed to high levels of TB and in my class 10 percent of the doctors got TB. It is a macho culture with many believing that they will not get TB.’

Von Delft is also unequivocal that all patients in a similar situation need to access drugs such as Bedaquiline. The math is simple. It saves lives.