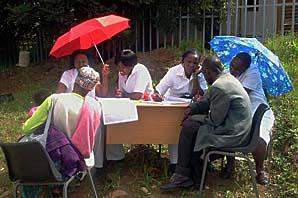 Lusikisiki. ‘ The Eastern Cape Provincial Department of Health has not delivered on their promise of a new, fully-functional Village Clinic to replace the previous one that had to close down after the department failed to pay rent for the premises. 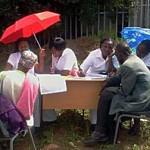 Last week OurHealth reported that there was no electricity, running water or ablution facilities at the single park home (an empty goods container often used as make-shift health-care facilities) that has been installed at the site, and that consultations and health services were performed in the unsheltered yard around the container.

Two more park homes are supposed to be delivered at the site, and in the meantime two tents and a gazebo have been erected to serve as a waiting room, nurses’ workstation and an HIV counselling and testing (HCT) room.

According to a nurse at the clinic, who didn’t want to be named, the poor conditions at the clinic have seen the HCT rates drop dramatically.

Zukile Madikizela, the community mobiliser co-ordinator for the Treatment Action Campaign, said conditions at the clinic were not user friendly and three nurses have been injured, falling down a specific set of stairs. Two of the nurses obtained minor injuries, but a third fractured an arm and had to be treated in a hospital.

The Lusikisiki community is unhappy about conditions at the clinic and is planning a march next week to the district office where they will air their grievances.

Mtshana Mvlisi is an OurHealth Citizen Journalist reporting from Lusikisiki in the OR Tambo health district in the Eastern Cape.