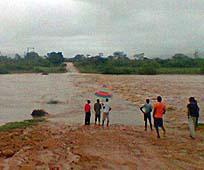 Vhembe. ‘ A Limpopo man has spoken of how he held his wife as she died in his arms after heavy rains caused a wall of their house to collapse on top of her. Edzani Musetsho said he was unable to get her to hospital because the bridge that leads out of their village was swept away by the flood water.

Over the past three weeks, heavy rain has wrecked havoc in the province, flooding roads and buildings, and leaving many people homeless, including two families in the village of Thengwe in the northern region of Limpopo.

‘I was in my room when it all happened,’ said Musetsho, who lost his home and his wife on 18 January. ‘I heard children screaming in the living room, and when I came out I found my wife lying on the floor under a pile of bricks. My children managed to run out of the house but I stayed behind to help my wife,’ he said.

One of Musetsho’s neighbours saw the tragic event taking place. ‘We heard a loud noise, it was the sound of bricks falling, and when we went to see what was going on, we saw that Mr Musetsho’s living room had collapsed. Unfortunately his wife was a victim and she died in his arms as there was no way to the hospital,” said the 46-year-old neighbour who didn’t want to be named.

“We feel very sorry for the children who now is left without a mother. The rain took their mother,” she said.

The Nethengwe family also had a narrow escape when their home collapsed, but were lucky to have all survived. ‘It started raining, and it just wouldn’t stop,’ said Fhumulani Nethengwe. ‘I never thought it would come to this. I’m just grateful that no one was injured when the house fell down.

‘It sounded like someone was pelting our house with stones, and when we went outside to see what was going on, the whole thing collapsed,’ said Nethengwe. ‘We didn’t even have time to get any of our belongings from the house.’