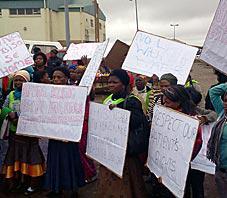 LUSIKISIKI. ‘After months of complaining and eventually taking action through protest, the community of this Eastern Cape village finally received a response from their district health office about the poor facilities at the Village Clinic.

Two weeks earlier community members, along with activists from the Treatment Action Campaign and Section 27, marched to the district health offices and handed over a memorandum stipulating their grievances with the sub-standard facilities at the local clinic, and demanded a response from the authorities within 14 days.

In response, the health authorities called a meeting with community members earlier this month to share their ideas for solutions to the issues raised by the community.

The sub-district clinic manager, Mrs Masumpa, acknowledged the failure on management’s part in terms of providing suitable facilities after the original Village Clinic was closed down last year because the Provincial Department of Health failed to pay the rent for the property. ‘Shifting Village Clinic to the Public Works site was not planned strategically as we had little time to come up with an alternative,” Masumpa said.

One of the major issues was with refrigeration facilities at the clinic. Up until now it has been difficult to store medicines that had to be kept cool, such as certain vaccines. The sub-district manager, Ms Ntlangulela, said that the department was addressing the issue: “We increased the number of cooler boxes to increase the number of children immunised every day (previously only 10 children could be vaccinated twice a week). Otherwise children should be taken to St Elizabeth Gateway Clinic to be vaccinated. These are only temporary solutions as Public Works has agreed to provide electricity soon,” said Ntlangulela.

A second issue was that no pap smears could be done at the facility because there were no private consultation rooms. In response the department suggested women go to the nearby Elizabeth Gateway clinic for these services, but community members argued that this was not a proper solution. “People are being turned away from St Elizabeth Gateway Clinic because the staff say they are overburdened already,” a community member, Busiswa Kwetane, said.

Another major issue is that of ablution. Currently there are no toilets for staff and visitors to the clinic. A Public Works representative said that there have been delays with the construction of toilets because there has been no diesel to run the machinery.

“Arrangements with Public Works were made that Village clinic staff will use their flushing toilets while the pit privy (toilet system) behind the park home is used by patients. For the time being, the department planned to put four pit privy toilets and superstructure toilets have already been organised,” said the Public Works official.

For provision of water supply, two water tanks have already been placed and filled with water.

Another major concern for patients is that there are no facilities for private consultations. Currently there are three tents on sight, but one is being used for consultation and is shared by nurses, the other is a waiting room and the gazebo is used for HIV counselling and testing.

The department said that they were addressing this issue. “There is a park home that is coming through freight within a month. The engineer from St Elizabeth hospital came over the weekend and assessed the space where the park home will be placed. It is a big structure that will address the issue of privacy and space,” OR Tambo district health manager promised.

Furthermore, Public Works is also in the process of improving the road leading to the clinic.

Masumpa said that this is a wake-up call to the department. “No one has to leave health facility without being well attended to, if this is happening, please let us know. Drastic action will be taken immediately,” Masumpa said.

Despite the many promises by the department, the community isn’t convinced that they will deliver on time. “We are concerned about the time frame and that the department has to speed up all these processes,’ said Siyabulela Mvilisi, a community member.

‘The response that we got did not commit to time frame. Though we were not that much satisfied somewhere, somehow we took their word for it,” he said.

Story by Tandeka Vinjwa-Hlongwane, an OurHealth Citizen Journalist reporting from Lusikisiki in the OR Tambo health district in the Eastern Cape.