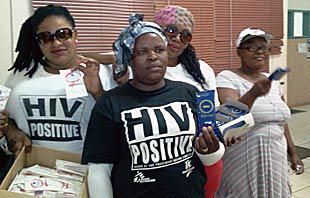 In the Eastern Cape Province, with a population of 6.5 million people and high unemployment rate (29.8 percent), the NSP is being implemented on the ground level through various projects and programmes.

Various HIV prevention programmes have been rolled out in the province, and some success have been achieved in the fight against HIV/AIDS.

In the province, 2.5 million people have been tested for HIV and HIV counselling and testing (HCT) is available at 76 percent of public health facilities here.

A safe circumcision programme has been implemented where circumcisions are done by trained traditional surgeons, instead of untrained practitioners. This not only helps curb the rate of new HIV infections, but also reduces the number of deaths among young men being circumcised by untrained people during initiation school.

Not all the programmes are aimed at preventing HIV and there are also projects in place to support people living with HIV. Various support and wellness services are offered by non-governmental organisations and community support groups.

During Condom Week, Ingquza Hill Local AIDS Council took the initiative to distribute condoms and educate communities on its use. The team of 15 identified high-transmission areas (HTA) in Lusikisiki and Flagstaff, such as taverns, salons, schools, correctional services, etc. where they distributed about 78 000 condoms.

“Government officials need to be hands-on with HIV programmes in order to fight HIV and other sexually transmitted infections. By so doing we engage a functional multi-sectoral approach,” said HIV/AIDS coordinator Mr Tukani who lead this campaign.

‘In order to reduce the number of teenage pregnancy, there has to be greater access to condoms,’ said a Life Orientation teacher at one of the local schools. ‘This means that these strategies need to be strengthened and monitored with more focus on school children between the ages of 14 and 19.’

A service area prevention manager commented that: ‘Unwanted pregnancies can also be reduced through scaling-up contraceptive services in public sector facilities, and by implementing fatherhood programmes in health districts and in the community to target men.’– OurHealth/Health-e News

Thandeka Vinjwa-Hlongwane in an OurHealth Citizen Journalist reporting from Lusikisiki in the OR Tambo health district in the Eastern Cape.