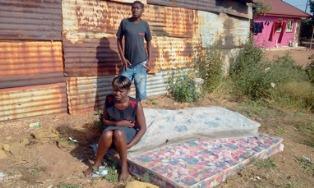 SOSHANGUVE. ‘ A young mother here is enduring a lot of hardship while waiting for the Human Settlement Department to construct housing as part of the Reconstruction and Development Programme (RDP).

Ivy Ngobeni is 23-years old. She is an orphan and mother of a little boy called Happy.

Although the Human Settlement Department has promised RDP development in the area and delivered bricks in 2005, nothing has happened yet. And in the meantime Ivy and Happy are staying with her two brothers in a one-room shack without electricity in Soshanguve Block JJ. But life is difficult for the young woman and she claims that she hasn’t enjoyed life for as long as she remembers.

She is HIV positive and on antiretrovirals, and says her younger brother is addicted to the drug nyaope and sometimes steal her treatment to make the concoction. “I have to hide my ARVs at a neighbour’s house when he is around,” says Ivy.

But the confined space where the four of them live pose other challenges as well: her brothers often fight with her over social grant money she receives for Happy, and privacy becomes an issue when the brothers want to be intimate with their girlfriends.

Neighbours say that they suspect her brothers may abuse Ivy when they are drunk.

‘Her health is quite miserable because none of them are working and at times they sleep without food,’ commented a neighbour. – OurHealth/Health-e News Service