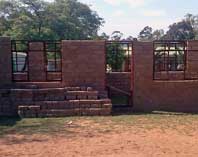 VHEMBE. ‘ Matavhela pre-school made the news last year due to the poor, unsafe conditions at the facility, despite the principal’s request to the Department of Education’s to upgrade it.

But when OurHealth followed up last month the situation there has changed for the better. “We are happy to announce that 2013 has brought some progress regarding our situation at the pre-school,’ said Mutshinyalo Nduvheni, the principal at Matavhela pre-school.

‘Last time we were complaining of not having a proper building, but community members have taken notice of the conditions and they managed to get some money together to build a new building for the children,” said Nduvheni.

A teacher at the pre-school, Nyambeleni Makhuvha, said: “We are in a hurry to construct the new building because we have been waiting for it for a long time. We suffered trying to get money together and even asked the Department of Education for assistance, but they never did anything about our situation. They promised to get back to us, but we never heard from them again.”

The parents are also relieved about the new building. “The parents have tried raising some money for a new building, but it was not enough. Now we are very happy and thankful to the community members who gave us money and some materials,” said Jane Mukwevho, an excited parent.

“Now that a proper building is being built, we no longer fear for our children’s health. The children used to get very cold in the old building, so they easily got the flu, and there were so many mosquitoes which could give them malaria,” she added.

Marium Ndou, who works in the kitchen at Matavhela pre-school said: “Things are going to be a lot better. The old building was a one-roomed classroom which was also a kitchen and a storeroom. The new building has three rooms so there will be space for everything. We used to be very worried when it started raining or when there ws wind because we always thought that the building could fall down.

‘I would like to again thank everyone who helped us, may God bless them,’ said Ndou.