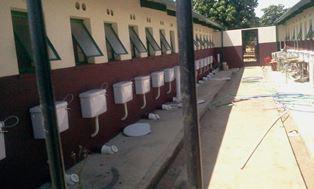 Millions of people do not have access to proper sanitation and in South African schools the situation is especially dire. Health-e News Service conducted an informal survey of the state of 17 schools’ toilets that fall within four of the National Health Insurance (NHI) pilot districts. At all 17 schools the toilets were in a shocking condition. By OurHealth Reporters. 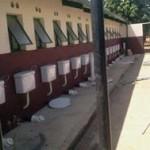 While all the schools had some form of sanitation facilities, in almost all of them the toilets were blocked, broken or filthy, making them unusable for large numbers of learners. Toilets were overcrowded and unable to cope with the numbers of learners needing to use them. None of the toilets had toilet paper or hand-washing facilities. Most principals claimed that they had on several occasions reported the situation to the local education department, but that they had given up.

This week a group of nine prominent South Africans, led by Archbishop Thabo Makgoba are undertaking what has been coined an Eastern Cape Schools Solidarity Visit. Taking place under the banner of the non-government organisation Equal Education, the delegation is being shown schools in dire conditions ‘ schools without toilets, classrooms, security or water ‘ to raise awareness about the school infrastructure crisis and the need for quality Minimum Norms and Standards for School infrastructure.

The South African Human Rights Commission (SAHRC) and many health institutions have confirmed in a number of reports and research studies that the lack of decent infrastructure infringes on a child’s right to education.

No access to toilets or being confronted with toilets that are mostly blocked or dirty infringes on the learners’ rights to equality and human dignity in the Bill of Rights. Failing to ensure this access is a failure to protect their equal entitlement to learn under conditions that respect, protect and promote the inherent human dignity of each child.

Research has shown that poor learning environments are linked to low levels of teacher morale, poor learner performance and high drop out rates.

In 2007, the Department of Basic Education’s first National Education Infrastructure Management System (NEIMS) report on school infrastructure was released and presented to Parliament in 2008. It reported that many schools do not have electricity, decent toilets and adequate teaching resources.

The Eastern Cape, Limpopo and KwaZulu-Natal provinces were the most affected by backlogs in infrastructure according to an SAHRC report The Right to Education released in 2004.

Since then, Equal Education and SECTION27 have started procedures to litigate.

In a supporting affidavit, Ursula Hoadley of the University of Cape Town’s School of Education, confirms that it is acknowledged in research and science that there is a link between the physical environment, in which learners are taught, and teaching and learning effectiveness, as well as learning outcomes.

The negative effect of poor infrastructure on a learner’s right to basic education can be said to comprise three broad categories:

–               A temporal component: poor infrastructure diminishes time for learning, for example if learners are forced to stand in long queues to make use of toilet facilities;

–               An affective component: poor infrastructure undermines learners’ self-esteem, their motivation to learn and signals that they are not cared for; and

–               A physical component: poor infrastructure may pose a threat to personal hygiene and safety and may affect a learner’s ability to concentrate.

‘It is clear in my view that the level of infrastructure provided at many public schools in South Africa falls far short of that required to ensure an environment which is conducive to learning and undermines the right to basic education,’ said Hoadley.

The international literature also makes extensive reference to the gendered impact of poor sanitary conditions in the school setting. In particular, monthly absenteeism by girls during menstruation because of a lack of proper sanitation facilities at schools has been documented in several international studies.

A study in Malawi revealed that a third of the 104 girls questioned said they never used the school toilets while menstruating, either waiting until they went home, using the bush or simply not going to school.

In another study in Nepal, 53% of the survey respondents said that they absent themselves from school during menstruation primarily because of a lack of privacy for cleaning or washing, a lack of availability of a disposal system for sanitary pads and cloths and a lack of water supply.

A report of a study by the ‘SACMEQIII Project in South Africa’ released in January last year by the Department of Basic Education and the Southern and Eastern Africa Consortium for Monitoring Educational Quality (SACMEQ) found that there were unacceptably too many schools where the ratio of learners to toilets was too high. The report reflects that ratios of learners to toilets have in fact increased between 2000 and 2007, particularly for girls.

The World Health Organisation recommendation is a ratio of 1 toilet to 30 learners.

A study released in 2011 by the Southern and Eastern Africa Consortium for Monitoring Educational Quality although no norms for the numbers of learners per toilet were available for South Africa, it is evident that Grade 6 learners in

South Africa were in schools where toilets were overcrowded. The study looked at the ratios in 2000 and 2008 and found that these ratios increased considerably during the period in question. In 2000 the ratio for Grade 6 boys was 54 boys per toilet, rising to 58 seven years later. Among the girls it was 30 girls per toilet in 2000, rising steeply to 51 in 2007.

Nokuthula Mayeki (18) from Harare in Khayelitsha has added her voice in an affidavit.

A Grade 11 learner at Kwamfundo Secondary School in Khayelitsha she explains that the boys’ and girls’ bathrooms are separate and that four of the seven taps work with no soap or paper towels.

In the girls’ section six of the seven toilets works, but there is no toilet paper, no rubbish bins and the doors do not lock. There are sanitary bins that are only emptied out once they are full.

If she were menstruating she would rather wait until she is home before going to the toilet. ‘This makes me very uncomfortable during class and makes learning harder, but I do not want to use that bathroom. I know of some girls at my school, if they are on their period and really want to go to the bathroom they will rather ask to go home and miss the rest of the school day than use the school’s bathroom to change.

‘When I cannot keep it in and I have to go to the bathroom, it is sometimes so dirty that I do not sit on the toilet seat and I use my foot to flush the toilet because I do not want to touch the handle.’

Some of the water points (taps) at the school do not work. Mayeki’s description fit that of the many rural and peri-urban schools visited for this article.

The Department of Water Affairs and Forestry has released recommendations to departments when planning schools.

Schools have to install one water supply terminal per 130 persons within 200m of the main building.

Schools hand washing facilities had to be accessible with one facility per four seats or four urinals.

Attempts to get comment from DBE and the national health department were unsuccessful.