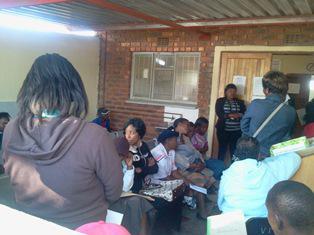 Dilopye village is situated in a remote area in the north-western region of the city of Tshwane, Hammanskraal, which is one of the National Health Insurance pilot sites with an estimated population of 35 000 people. Many of these are unemployed and depend on social assistance grants.

Health-e visited the area to monitor the quality of health care in Dilopye clinic, situated next to a primary school and a tribal authority office.

The clinic operates in a five-room brick house, with a pharmacy room shared by a data capturer and the facility manager as an office.

The nurse, who did not want to be named, said the facility was not user friendly The main consulting room is a shambles: there is a table full of papers, with a variety of pills and medicines on top of them.

The nurse said there was a staff shortage. There are only eight nurses and on the day OurHealth visited only four were on duty. There is a daily intake of around 150 patients, and two nurses are out on an immunization campaign.

Eva Matlakane, a patient at the clinic said she arrived at the clinic at 7.30am and had not been assisted. There was a long queue and the small waiting space, which accommodates fewer than 30 people, was cramped. Matlakane said she was sick and very hungry.

Another staff nurse said a number of government officials, politicians and members of parliament had visited them regularly and at least there was shade and the patients’ toilets had been renovated.

Phillip Mayilwane the manager of a home-based care organisation operating in Dilopye, Stinkwater and Refentse areas said the organisation had a very good relationship with the clinic under the guidance of Nancy Mashiane, the facility manager

‘But the challenge is   when the community health workers   are supposed to come and collect medicines for the housebound. They wait for more than three hours to be attended to due to shortage of staff.’ OurHealth/Health-e News Service

Mishack Mahlangu is an OurHealth Citizen Journalist reporting from the Tshwane health district in Gauteng.