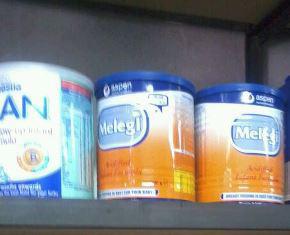 BETHLEHEM – Bisimillah Supermarket in Bethlehem is illegally selling Melegi Infant Formula marked with the stamp: “State use only, not for re-sale”.

When OurHealth visited the supermarket, there were four 400g tins of Melegi on the shelves waiting to be sold, OurHealth bought a tin for R55.

According to a nurse at the Mphohadi clinic in Bethlehem who wants to remain anonymous, the milk is meant for infants with nutritional problems and infants who are HIV positive.

“The Department Of Health buys the Melegi formula for each clinic. We give out the milk for free to infants who lack nutrition and those who are found to be HIV positive, because this milk boosts their immune system. We just have been out of stock for a while now,” she said after identifying the formula.

When confronted, the owners of the Bisimillah supermarket, who originate from Bangladesh,deny ever selling the milk.

One owner, who told OurHealth his name was Joel but later denied the name, said: “We buy the milk for our cousin’s baby. She comes to collect a tin on weekly basis.”

The owners refused to reveal their supplier for the Melegi formula and threatened to throw OurHealth out of their supermarket.

But four sources who want to remain anonymous have bought the formula from the supermarket and it never came to their attention to check the container in detail.

“I do not know what to say, I have been using my money to support theft without even knowing. I feel bad and as guilty. Our government must do something about this” said one source

According to Dineo Mopeli, a health official who heads the Nutrition portfolio at district level, it has been a while since the department ordered the formula and most clinics don’t have the Melegi formula in stock.

“This comes to me as a surprise. The Department of Health is not aware of the formula being sold out. Our last order for the formula was made early last year and only this week will we be placing another order.” “I am glad this is brought to my attention. It shall be attended to,” said Mopeli.