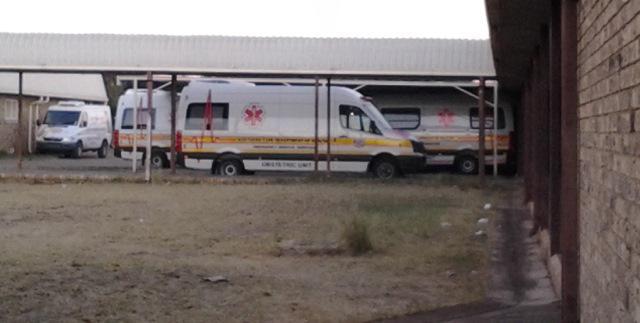 Ten brand new ambulances donated to the Kuruman Hospital by the John Taolo Gaetsewe Developmental Trust last December are still standing unused at the back of the hospital. 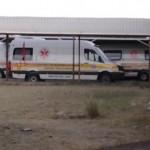 Ten brand new ambulances donated to the Kuruman Hospital by the John Taolo Gaetsewe Developmental Trust  last December are still standing unused at the back of the hospital.

This is apparently because personnel still have to be trained and the vehicles need to be registered in the Department of Health’s name.

According to the Department of Health’s provincial media officer, Lulu Mxekezo, the  vehicles are special because they are for obstetric services and this is why they need specially trained staff.

Departmental official Modiri Gabaatlhole had asked the Trust to purchase ambuances  in order to improve maternal and infant mortality in the district.

The Trust is funded by the Sishen Iron Ore Mine, known as Kumba, that is in the district.

According to Gabaatlhole’s proposal, the ambulances were in support of the 5th Millenium Development Goal to improve maternal and child health, and in line with Health Minister Aaron Motsoaledi’s declaration that every hospital should have an obstetric ambulance.

About R11, 3 million spent on the ambulances, including training for the emergency medical staff to operate ambulances

“About 23 people are currently at the training in  Cape Town , at Cape Peninsula University of Technology and only five have passed while other are not doing well. The documents have all been sent to traffic department for vehicle licensing  and only five ambulances will be licensed out of ten,  “said Gabaatlhole.

“It is so sad for us as patients going to Kimberley to see specialists because ambulances shortage is a challenge.  We sometimes miss our appointment or arrive late and come back unattended from Kimberly,” said Kehilwe Khoza , a cancer patient.